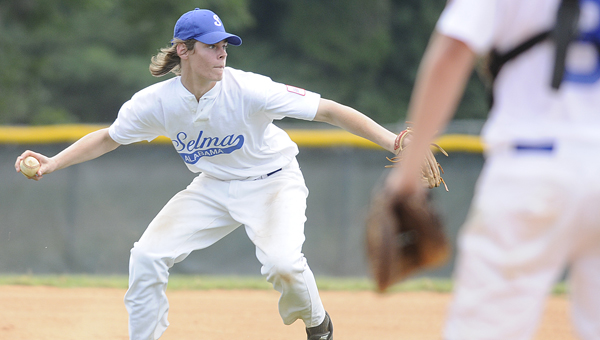 Selma’s Hunter Webster fields a ground ball during Friday’s game versus Tuscaloosa at Bloch Park. Selma was eliminated from the tournament after the 4-0 defeat. –Daniel Evans

The Dixie Major state baseball tournament will continue through the weekend at Bloch Park, but Selma’s group of all-stars won’t be there.

The host team fell to Tuscaloosa 4-0 Friday afternoon, its second loss in two days, to end its championship chase almost as quickly as it began.

“It’s disappointing,” Selma head coach Johnny Raybon said. “You’ve got to get that first win under your belt to really get together as a team. If you win that game and you are still in it, anything can happen.”

Instead, Selma will have to settle for wondering what might have been.

Raybon said he felt the team, which had only played three games total, was one more game away from gelling as a team.

Tuscaloosa scored twice in the fifth inning Friday to double its lead to 4-0 on a sacrifice bunt by Blake Gray that scored Mitchell Mueller and a RBI double by Josh McDaniel, but it was the Tuscaloosa defense that kept Selma at bay.

Throughout the game, Tuscaloosa players made remarkable defensive plays to keep Selma off the bases and, as a result, off the scoreboard.

In the third inning, Selma’s Trey Powe hit a pop fly to left field that was robbed by Dalton Pollard, which set the tone for the entire day.

Joey Raybon was robbed of a base hit twice by the same player, as Mueller dove to take away what appeared to be sure hits in the fifth and seventh inning.

“I think they robbed about eight hits from us,” Johnny said. “They played super defense. We had eight balls that should have fell. We should have been in the ball game.”

Tuscaloosa head coach William Crawford said his team’s defensive performance wasn’t surprising, because his team has shown the ability to play that way throughout the summer.

“We’ve got good speed in the outfield on our team this summer,” Crawford said. “They get good reads on the ball and it shows.”

Tuscaloosa also had a great day on the pitching mound, as Christopher Stone, Justin Hall and Tyler Wood combined to keep Selma from mounting a serious charge.

The best chance for Selma to make some noise came in the bottom of the fifth inning. After Powe had singled, Hall walked Adam Seele and Hunter Webster to load the bases, but Carstella Hayes grounded out to end the inning.

Tuscaloosa will move on to play Saturday, where it will meet the loser of Friday’s game between Auburn and Greenville.

“We need to continue to pitch well and play good defense and we will be able to keep advancing,” Crawford said.

Auburn lights up Selma in each team’s state tournament opener