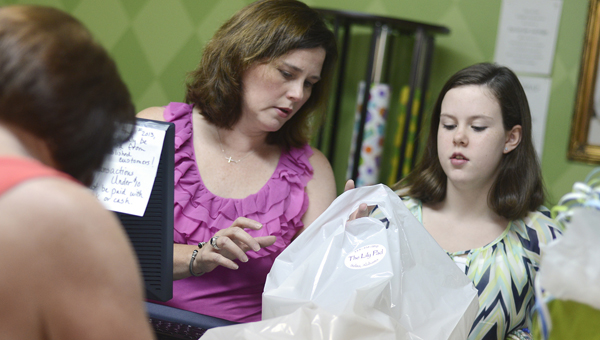 Sherie Leigh Ousley has known this day would come, but that doesn’t make it any easier.

After ten years in business, Sherie Leigh announced this week she would be closing The Lily Pad, the children’s clothing and craft store on Broad Street, to spend more time with her husband and three children.

“The tenth anniversary of the store was this past Sunday, and my husband and I have been saying that once our little boy went to the first grade, this would probably happen,” Sherie Leigh said. “We are sticking to that plan.”

It should be no surprise Sherie Leigh, a mother of three, would choose family over work. After all, it’s a big reason she opened the store.

“This has been a family effort from day one, there’s no doubt,” Sherie Leigh said. “My dad opens my store for me everyday. My mom works with me three days a week. My children have grown up here. It’s been a real blessing for my family. I’ve loved it, but it’s time to move on.”

On Friday, Sherie Leigh was working yet again with her eldest daughter Mary Anne Ousley and mother Sherie Sherrer, who said the chance to work with her family members has made the last decade so special.

“It’s been so special to see family every day,” Sherrer said. “Even though we don’t live very far apart, sometimes days go by and you’ll notice you haven’t seen the children, but we’ll work harder at it since we won’t have the store.”

Mary Anne said she has enjoyed working with customers, along with a few other benefits of the job.

“It’s been fun,” Mary Anne said. “I wrap gifts, work the computer, greet customers and make sure everything is where it should be in the store. It’s been fun working here, and it’s been nice to always have good clothes to wear.”

Sherie Leigh said she would also miss spending time with the customers who have frequented her store since the day it opened.

“I’ve loved the customers, and being able to spend time with my children and my parents here,” Sherie Leigh said. “You never know who is going to walk through that door and spend time with you, and that’s always been one of my favorite things about this work.”

Sherie Leigh said she is unsure of the final day the store will be open, but she is hopeful someone will buy the business she has worked hard to keep successful.

“We don’t have a last day set just yet. I just announced this week that we were closing, so it’s still a pretty new reality,” Sherie Leigh said. “Right now, everything here is for sale. I don’t own the building, but the business is for sale. If someone wants to buy the store, they need to know it’s a lot of work, but it is worth it.”

Reflecting on ten years of paperwork, shelf stocking and hard work, Sherie Leigh said she will always think fondly of her time at The Lily Pad.

“It has been wonderful, and I have loved it,” Sherie Leigh said. “I’m just ready to move on with my kids.”