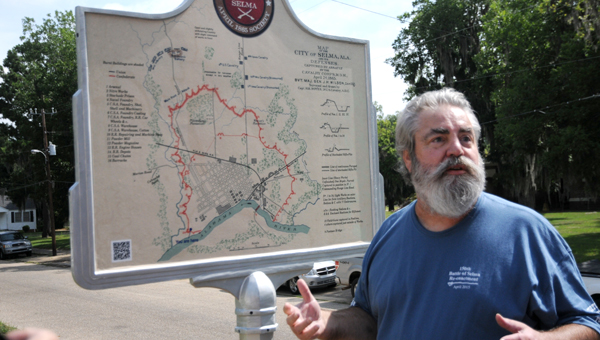 April 1865 Society President James Hammonds explains details of a historical marker located just outside of Riverside Park, where the Battle of Selma re-enactment is held annually. The marker, unveiled Wednesday, is the first in a series that the society plans to unveil in preparation for the 150th anniversary of the Battle of Selma. (Josh Bergeron | Times-Journal)

The battle is coming.

With just under nine months until the 150th anniversary of the Battle of Selma, the April 1865 Society unveiled the first in a series of historical markers Wednesday near Riverside Park. Society president James Hammonds said the markers use soldiers’ journals to tell the story of the battle.

Hammonds said he hopes the markers provide an interesting way for visitors to learn about the battle’s events and help boost interest for the 150th anniversary.

“Next spring, the spring of 2015, should be the biggest tourism season for the city of Selma and Dallas County ever,” Hammonds said. “We should have double the usual number of participants [in the re-enactment] that we normally have. It should be bigger and better than the circus ever was.” 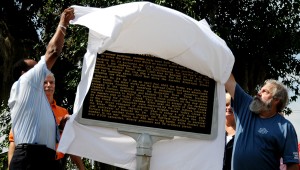 Currently, the society plans to unveil 10 markers in different locations around the city, including one at the St. James Hotel, by the 150th anniversary. Hammonds said the society would create a historic trail of the markers once the first several are placed. A brochure, outlining the various locations, would help guide visitors to the historic markers’ locations, Hammonds said.

“There should be enough downtown that you could walk to and several out on Summerfield Road where the biggest action took place,” he said.

The society also incorporated a piece of technology into the markers.

In the bottom corner of the marker is a small square code that can be used to view photos or videos. Visitors would first need to download a QR Code reader app onto a smartphone. The app scans the marker’s code and redirects to a video that tells history about the specific marker.

Selma Mayor George Evans was visibly excited by the marker and said the series could be a big help in promoting the Battle of Selma re-enactment.

“I think the markers do a lot for Selma,” he said. “You won’t even need a tour guide.”

Hammonds said the April 1865 Society — a non-profit organization — paid for the markers through donations, membership fees and money raised from battle re-enactments.

Though the society currently has money to purchase 10 markers, Hammonds said he hopes to raise enough money for more than a dozen more.

“We can just keep on going,” he said. “If we get enough money for an additional 15, I know where the 16th one would go.”