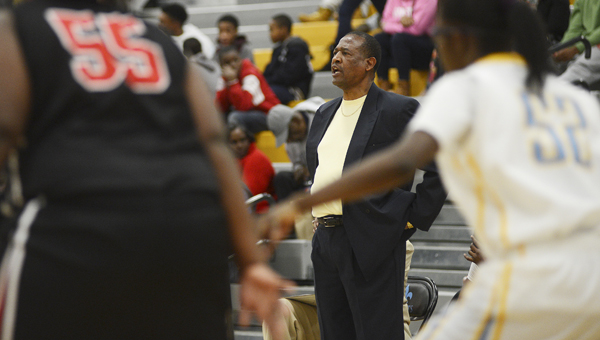 The Selma Lady Saints’ basketball team was young last season, and it showed in a hard fought loss to Paul Bryant in a sub-regional playoff game that ended their season.

This season the Saints’ core returns intact, minus the graduated Brenna Porter, and hopes to use last year’s experience as motivation to advance further in the postseason. Of course, getting there is the first step, and the Saints used a home play date, three games at Park Crossing High School in Montgomery and a three-team gathering at Keith to try to get all the kinks worked out this summer.

Despite needing to work on how quickly they get up and down the floor, Selma went 9-2 this summer and did it without one of their key players.

Areyanna Williams, missed most of Selma’s summer workouts with a hip injury. Williams did play in Selma’s home play date, but outside of that she was unable to participate.

“The other kids just bounced around,” Harris said. “That’s what we teach them that if one goes down somebody else has got to step up.”

Selma ended the summer on a high note with a spectular finish against one of their biggest rivals.

In their final game of the offseason against Keith, Jacquetta Dailey drove the lane and passed to Jamya Smith, who nailed a three-pointer in the final seconds to give Selma the win.

“It looked like Lebron and Ray Allen,” Harris said. “Smith rainbowed it to win the game.”

After the victory, Harris was proud that his team didn’t go overboard with celebration.

After all, this was a summer contest that won’t mean anything when teams tipoff the season in the fall.

“It built their confidence, and what I like about my kids is they don’t get rattled with a win or loss,” Harris said. “They didn’t say anything about that game … We understand that doesn’t count. The regular season games are what count.”

The regular season won’t get underway until  the fall.

Until then, the Lady Saints will continue to work out a twice a week to try to get prepared for another run at a state championship.

Selma native and NFL star Michael Johnson stands by a cutout of himself donning a Cincinnati Bengals jersey as a... read more