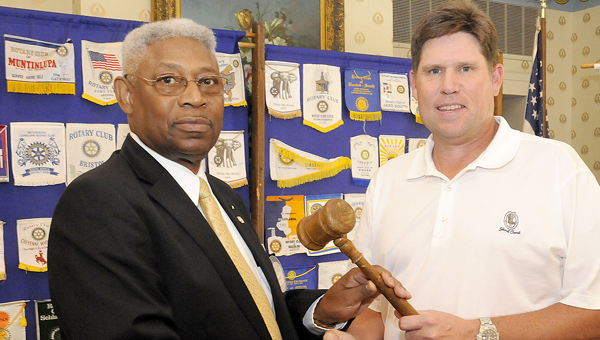 The Rev. Dr. McNair Ramsey will serve a rare second term as president of the Rotary Club of Selma.

Ramsey, a native of Wilcox County, has served as teacher and as interim president of Concordia College Alabama. He previously served as president of the Selma Rotary Club in 2004-2005 and as assistant district governor in 2006-2007.

“It’s very unusual for anyone to serve more than one term as president,” said Bob Kelley, a former Rotary district governor. “He embodies the Rotary slogan of service above self.”

During Monday’s luncheon at the St. James Hotel, previous presidents of the club passed a gavel in sequential order to the new club president.

Troy Harvill, the club’s outgoing president said he was happy with his year as president, and he looks forward to Ramsey’s term.

“He’s a great leader, a proven leader in the business world as well as the Rotary Club,” Harvill said. “This is his second time, so I look forward to serving under his leadership.”

Ramsey said his previous term as president was notable because of the membership numbers.

“We had a good number of Rotarians in the club, and we maintained that,” Ramsey said. “We had some good fundraisers, such as the barbecue sale and the wine and cheese activity, so we had a real good year that year.”

Ramsey said he had several plans to make Rotary more fun and engaging, including club outings, attending a Montgomery Biscuits baseball game and picking a month to drum up interest in the organization to attrack new members.

“We have September designated as our Rotary Month, where we’re going to invite prospective members to come and lunch with us and see if they want to join us as a club,” Ramsey said.

Ramsey said the new plans for the club would not replace the work the club does in the community.

“We will continue to do our Citizen of the Year,” Ramsey said. “That’ll be a citizen from this Selma-Dallas County area.”