Selma community comes together for Fourth of July fun 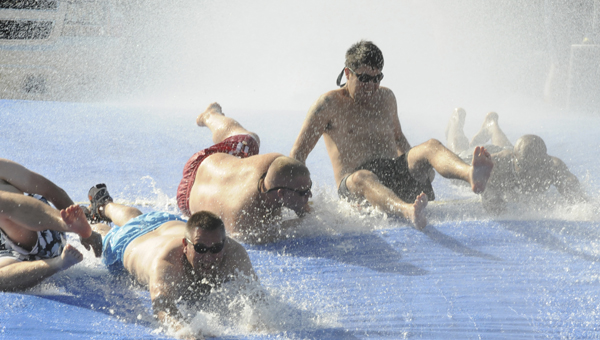 The Selma Fire Department races down the water slide Friday during the Selma City Fourth of July celebration at Riverfront Park. The department used their fire hose to supply the water for the slide. (Sarah Robinson | Times-Journal)

Laughter, playful screams and music echoed from Riverfront Park Friday as the Selma community celebrated the Fourth of July.

Crowds of people migrated to Riverfront Park Friday for the city’s annual Independence Day event. The occasion attracts residents from both inside and outside of Dallas County searching for a way to enjoy the holiday while recognizing its importance.

“It gives the community an opportunity to come out and enjoy themselves,” said James Benderson, Selma City’s planning and development director. “It’s something to do here, instead of them traveling to some other city or some other town.”

People of all ages visited the park to enjoy an inflatable bounce house, music provided by Paul Alexander’s Porta Pary DJ Entertainment, food, a children’s train and fireworks via video board.

Not only did the Selma Fire Department help provide a water slide by lending one of their fire hoses, but they also joined the fun by taking a few trips down the wet ride.

Selma residents and married couple James and Olla Moore felt it was important that they support their city by being a part of the celebration Friday.

“I think it’s important, because this is our city,” Olla said. “I just wish more people would come out and celebrate, because we’re free. We’re independent.”

Olla said the event has been held at Bloch Park several times in the past.

Olla said that while she was pleased with the Independence day events held at Bloch park, she also enjoyed the change in scenery that came with having it at Riverfront Park.

“I just like the atmosphere, and the different environment out here,” Olla said.