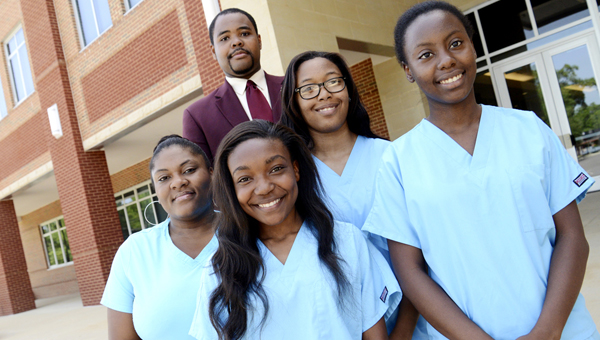 Two Selma High School graduates have a leg up on their competition after earning their Certified Nursing Assistant license.

“This will be a big help to them. When I went to nursing school, I went in and didn’t even know how to take someone’s blood pressure,” said Carter-Clark, who just completed her third year of teaching at Selma High School. “But they have already mastered the basic skills many people haven’t done already.”

The four girls were among the nine who took Carter-Clark’s Nursing Aide Training class this year, during which they learned everything it takes to be a Certified Nursing Assistant.

“They learned things about the body systems, but they also learned about caring for the elderly,” Carter-Clark said. “CNA’s mostly work in long-term care facilities. They can work in hospitals, but they learn to care for gerontological patients.”

During the nursing aide class, the students learned how to properly make a bed and provide a bed bath, check vitals signs, as well as how best to work with patients who use walking devices and how to care for people dealing with dementia.

Jones, who has been accepted into medical school at UAB, said she is hoping to pursue a career in pediatric medicine.

“I think I like children better than adults, but I just like helping people,” Jones said. “And I’m a pretty shy person, but this class taught me how to get over that by learning the importance of good communication.”

Carter-Clark said communication skills — between co-workers, as well as with patients — was something she stressed throughout the year-long class.

“Communication is a huge part of this business,” Carter-Clark said. “Instead of speaking in clinical terms, it’s important to be able to speak with your patient in terms they are comfortable with.”

Although her first attempt at the test did not turn out as she’d wished, Lewis said she would try again, as she still hopes to pursue a medical career of her own.

“I definitely want to take the test again, because I want to be an anesthesiologist someday,” Lewis said. “I think the job would fit me.”

Woods, who will attend Wallace Community College Selma in the fall, said the class and certification will serve her well as she pursues a career in nursing and eventually in hospital management.

“It meant a lot to me, and I feel like I accomplished a lot even before I graduated high school,” Woods said. “I really think this certification will help me a lot.”