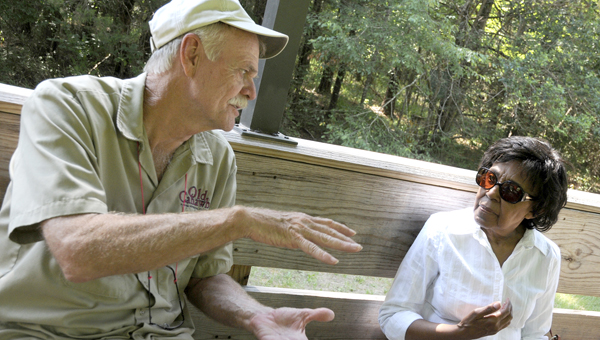 For at least the second time this year, Old Cahawba Archaeological Park has given the public a chance to relive black history with an informative tour around the area.

The park held a tour this weekend explaining the history of how former enslaved residents of Old Cahawba and areas close by played a vital role in rebuilding the region post Civil War. Led by archaeological interpreter Jack Bergstresser, the African-American Community After Emancipation Tour awed those who ventured it Saturday morning.

“I think it’s really neat, “ Bergstresser said in response to attracting residents from outside of the area. “I’m glad the word got out.”

During the one-hour tour, Bergstresser showed guests the one-room schoolhouse built by the black community, the ruins of the Methodist Episcopal Church, the Negro Burial Ground where deceased slaves were buried, the Dallas County Courthouse where African-Americans registered to vote for the first time after years of being denied that right and more.

California residents Sylvia and Levi Bennett came to Selma to visit family and friends this Fourth of July weekend. When they heard about the African-American Community After Emancipation Tour, they eagerly made plans to join.

Bennett said she was shocked to learn that Old Cahawba was once home to Alabama’s state capitol, and she was looking forward to learning what other great historical facts the area has to offer.

“I also didn’t realize the impact that slavery had in this particular area,” Sylvia Bennett said. “I just wanted to find out a little bit more. I’m generally interested to see what all it entails.”

Selma community comes together for Fourth of July fun

The Selma Fire Department races down the water slide Friday during the Selma City Fourth of July celebration at Riverfront... read more