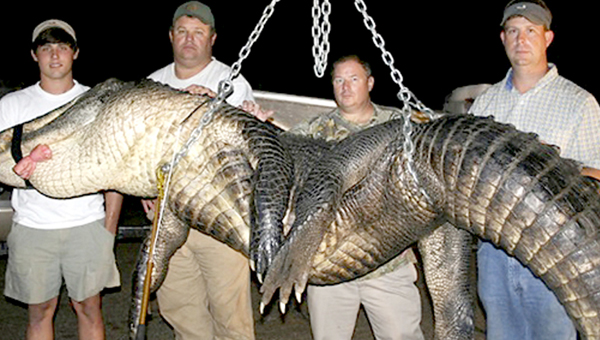 The “Fancher Alligator” was caught in August 2012, weighed in at 814 pounds and was over 14 feet in length. (Submitted photo | Times-Journal)

Those wanting to test the limits of their hunting abilities have only until Tuesday at 8 a.m. to register online for Alabama’s next alligator hunting season. Tuesday marks the deadline to register for one of the all-important tags needed to hunt.

There are three regions hunters can register for a tag. Dallas County falls in the west central Alabama region. The names of 50 hunters will be drawn to receive a tag for the region, but Chuck Sykes, director of the Alabama Division of Wildlife Freshwater Fisheries, said a hunter could apply for a tag in any of the regions.

“Anybody in the state can register for west central Alabama,” Sykes said. “They can be on the coast or the can be in North Alabama, they just have to pick which area they want to apply for.”

Sykes said that as of Monday, June 30, nearly 500 hunters had already applied for a tag in the west central Alabama region for this upcoming hunting season and that much the region’s appeal came from the size of alligators in the area.

“A lot of the larger alligators are coming from west central Alabama, so that’s where people are wanting to go,” he said.

Unlike previous season, hunters are only being allowed to apply for a tag one time. Those who receive a tag for the first time are required to attend a class that will go over the requirements and safety tips for hunters.

Joe Johnston, a conservation officer, said those who received a tag in previous years were not necessarily required to attend the class.

“If you were lucky enough to get a tag last year, and had already been through the course, then you would not be required to come,” Johnston said. “You would certainly be welcomed, but you wouldn’t be required to.”

One of the things applicants will learn at the class is that all of those attending the hunt are required to have a hunting license with them, Johnston said.

Tad Lightfoot, who had the opportunity to go alligator hunting the first season in Alabama, said the experience was well worth it.

“I grew up in Dallas County, we’ve hunted everything there is to hunt around here, I’ve never been able to hunt alligators,” Lightfoot said. “It’s the first thing I’d ever hunted that could hunt you.”

While Lightfoot said he would not be applying for a tag this year, he said those wanting to apply for a tag should be cautious and well-prepared.

“You’ve got to really pay attention to what you’re doing,” Lightfoot said. “You can’t have too many people in the boat. You’ve got to have the right equipment. A 600-pound alligator that’s 13-feet-long, will hurt you in a heartbeat.”

Hunters will be randomly chosen by computer to receive one tag each. Tags are non-transferable.

The drawing for tags will take place Tuesday, July 8 with results being posted online. Applicant’s acceptance for the tag is required by Tuesday, July 15 at 8 a.m. If a tag is not accepted, it will go to the next person on the list who then has 24 hours to respond.

Bettie Pritchett, secretary for the Selma Police Department’s Traffic Division, wears a helmet and looks skyward while posing for a... read more