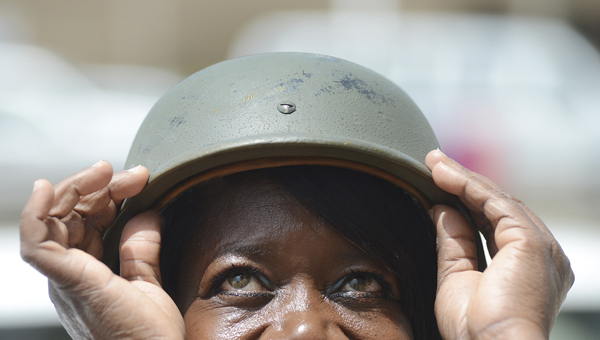 Bettie Pritchett, secretary for the Selma Police Department’s Traffic Division, wears a helmet and looks skyward while posing for a photograph Thursday afternoon. Selma Chief of Police William Riley said his department is trying to educate the public about the dangers of firing weapons into the air on holiday like the Fourth of July and New Years Eve. (Jay Sowers | Times-Journal)

There is one holiday tradition the Selma Police Department would like to see forgotten this Fourth of July. Residents of Selma frequently firing their weapons into the air to celebrate the occasion.

“Every year, especially on certain holidays, we make an announcement to the public that this is not the appropriate thing to do because when a bullet, a projectile, goes up, it has to come down,” said Selma Chief of Police William Riley. “It is a big, huge annoyance. And it is an annoyance that it very dangerous.”

Sgt. Tory Neely, a 20-year veteran of the department, said people need to consider where their bullets will land before pulling the trigger.

“Sometimes people get out and they shoot their guns, and it’s a fun thing to them and they are not really thinking about the consequences behind that actions. Something could easily get damaged or someone could get injured or killed,” Neely said. “People need to understand, when a projectile comes out of a gun, it has to go somewhere. It just doesn’t go up into the atmosphere and evaporate.”

Riley said he has personally seen several instances of property damage caused by guns being fired into the air on the Fourth of July and News Years over recent years.

“It’s not a rare thing for someone in town to have a leak in their roof, only to find out it’s a bullet hole,” Riley said. “I know a neighbor of mine recent found two bullet holes in her roof.”

Neely said anyone caught discharging a firearm within the city limits would face stiff legal penalties.

“We’ve got misdemeanor charges when someone discharges a weapon in the city limits. There are also felony charges if you shoot into a vehicle or into a dwelling,” Neely said. “If you are caught, you are going to jail. What else can I say?”

Riley said he realizes it will be difficult to get everyone to holster their firearms Friday night, but his department would try to get the word out about the dangers of firing into the night sky.

“Will we be able to stop this? No. I highly doubt it,” Riley said. “But, we can keep trying to educate people about the consequences of their actions and hope that reality permeates into their minds and makes them think twice.”

Riley said he hopes the charges and legal fees levied against people found shooting a firearm within the city limits will convince more people to not do so Friday evening.

“You just can’t discharge a firearm into the city. If you get caught, you’ll wind up going to jail and that’s going to cost you some time and money,” Riley said.