Hale County District Judge Tim Evans sentenced Turner to 30 days in jail, which was suspended for six months of probation. 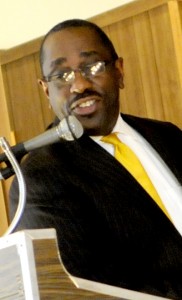 District Attorney Michael Jackson said the incident occurred Feb. 20 at 10:50 a.m. when a State Trooper pulled Turner over for driving 100 m.p.h. in a 40 mph zone.

The trooper testified in court that Turner passed a car on Alabama 61 while driving toward Uniontown, Jackson said. Turner passed a car while the centerline was solid, which, by law, prevents passing on a two-lane road, according to the state trooper’s testimony.

The State Trooper had to accelerate to an excessive speed to catch up to Turner, according to court testimony.

Jackson said Turner should slow down when driving before he kills himself or another driver.

“He must think he’s Dale Earnhardt Jr.,” Jackson said. “We’re going to have to send [Turner] to Talledega.”

It isn’t the first time Turner has been charged with reckless driving, according to Jackson.

Jackson said Turner previously pleaded guilty to a reckless driving charge in October 2013. The prior charge stems from an incident that occurred in Mt. Vernon, Jackson said.