Morgan athletes using CrossFit to get into shape 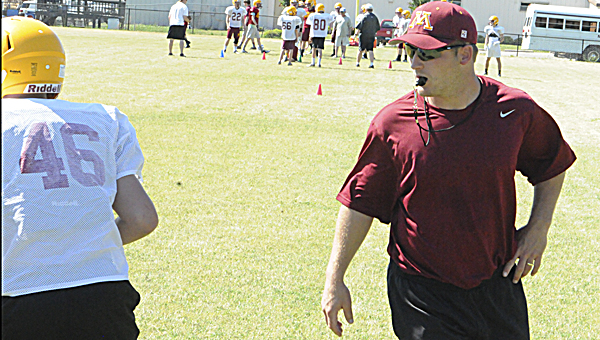 Morgan Academy head coach Jake Wingo directs players at a spring training practice earlier this year. Wingo and the Senators are working out four times a week this summer, with two of those workouts taking place at Selma CrossFit.–File Photo

An email sent to Morgan Academy parents and students this week encouraged them to get behind the school’s athletic programs and based on the workout regimen for many of the Senators’ athletes this summer, it’s clear they deserve the support.

Male and female Senators’ athletes work out four times each week, with two of those taking place at the school and the other two at Selma CrossFit.

Jake Wingo, the Senators athletic director and head football coach, has used CrossFit as a workout tool in the past, and knows how much it can help players in all sports, so he’s brought it to Morgan.

“If we weren’t going to CrossFit, what we would be doing on those Mondays would be very similar to CrossFit,” Wingo said. “It’s more of an aerobic style [workout]. It’s higher reps, less weight and no rest. It’s great for your mind as well as your body.”

While Wingo pushes the Senators through high weight, low repetition workouts twice a week at the school, CrossFit does the exact opposite. At CrossFit, the players are put through aerobic style workouts that deal with their overall core.

“They are doing the workout against the clock, against their teammates as a competition, so it creates [competition], and they are working out at the same time, so I love it,” Wingo said. “It is completely in line with my philosophy.”

Reid McMillion, a trainer with Selma CrossFit, said that around 70 Senators’ athletes are in their sixth week in CrossFit’s summer program and will continue training throughout the summer. Based on their workouts, McMillion said he can already tell a difference in many of the youth.

“In everything these kids do, I notice a major increase in a lot of their flexibility. In a short amount of time, they start building their core strength,” McMillion said.

McMillion said people any age can do CrossFit, and the Morgan athletes are showing that as athletes as young as 10 are taking part.

“It’s adaptive to what you are looking for, no matter what age,” McMillion said. “We have kids from 10 years old and I think our oldest CrossFit participant is 80.”

While many of the Senators’ athletes are working hard this summer, the email sent to parents and students this week encouraged them to fully support the Morgan academic and athletic programs.

“It takes a whole school and a whole community to make it successful, and we need everybody pulling in the same direction,” Wingo said. “[We have] one common goal. We are trying to get the culture with that mindset, no matter what sport it is  — football, soccer, tennis — everybody supporting each other. I think we can only benefit. That’s what our goal is.”