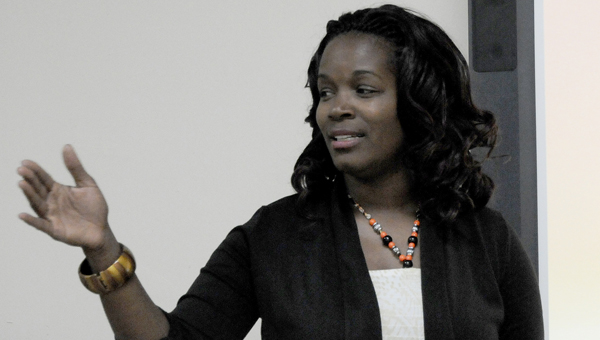 Timeka Ross comes from a family of givers.

Growing up in a crowded house in the south side of Chicago, Ross would watch her mother give away everything from earrings to furniture to friends and neighbors in need.

“I remember watching her give away new furniture to people at the church or down the street, and thinking ‘What are you doing?’” Ross said. “And it’s funny now because my mom fusses at me for doing the same things she did.”

As an assistant professor of English and the head track and field coach at Concordia College, Ross displays her giving spirit in and out of the classroom. Under her direction, the team serves the community by organizing clean-up days, helping local schools with track practices and working with various charities.

Ross said track and field at Concordia has grown into something much larger than just an athletic team since she started the program seven years ago.

“It’s been a long road because of the lack of resources,” she said. “It goes beyond simply running fast, throwing and jumping. They have to have the character and the academic, spiritual and social element.”

Ross found her passion for track and field when she attended high school in Oxnard, California.

“I found a love for track as an outlet and a good way to make friends when I moved to California,” she said.

After high school, Ross attended Alabama State University, where she met her husband. Shortly after being married, Ross’ husband was killed in August 1999, the summer before her senior year at ASU.

Ross said the death of her husband was tough, but over time, it has brought her closer to God.

As a single mother, Ross remembers the difficulties she faced when she was still in school and raising her son, Kareem Jr.

“I can remember days where I had to sit with my child outside the classroom and take notes from the door because the instructor kicked me out,” Ross said. “… if I have students who come to me and say they have no child care, I’ll say ‘yes’ and let them stay.”

Ross also recognizes the difficulties of being a college athlete, especially when injuries occur. She said she does not pull athlete scholarships if someone on the team gets hurt and can’t compete.

Ross stays active by playing basketball with her son on a regular basis at her home in Valley Grande.

Ross said she will spend her summer spending time with her son and recruiting for the track and field team.

“I look for people with the right attitude and character,” she said. “I’ll continue to give them and the team everything I can to mold them into productive members of the community.”

Rick Schober The seeds for Rick Schober’s love for his family’s forestry business were planted at a very young age.... read more