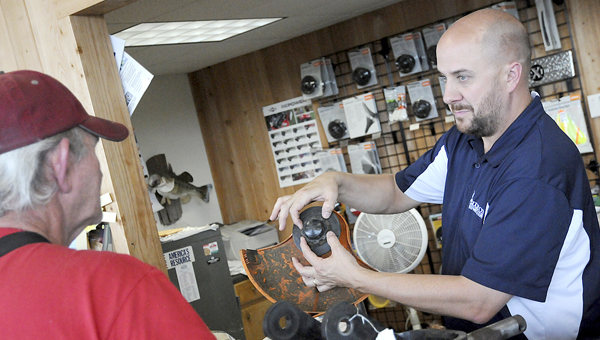 Tad Lightfoot isn’t originally from Selma, but after spending most of his life in the Black Belt’s queen city, it has quickly become home.

Lightfoot is the owner of Blue Ox Equipment, near the U.S. 80 Bypass.

He is originally from Iowa and moved to the Selma area as a child, when his father came to look at opening a doctor’s office. Lightfoot spent his childhood years at Meadowview Christian School and lived in West Selma.

“We pretty much did normal kid things, like hanging out in the woods and would come in at night and play video games,” Lightfoot said.

But soon enough, Lightfoot got homesick for Selma.

“You get away for a while and you just know that Selma is home,” he said.

“The building came up for sale, and I thought it would be a great location for the kind of commerce that we do,” Lightfoot said.

Blue Ox Equipment has now been open about 10 years. In that time, Lightfoot said his business has expanded and grown, but serving customers’ needs is still a priority.

“I’m technically the owner, but I still enjoy working the counter and helping people figure out how to solve a problem,” Lightfoot said. “I’m proud of how far we have come. It makes me feel good when a guy comes in and says ‘this is the best piece of equipment I’ve ever bought.’”

Buying a lawnmower or piece of equipment is all about getting the best brands, he said.

“It may cost more money to buy a higher quality product, but people should realize that it is going to last years longer,” Lightfoot said.

Increased availability of the internet has changed business slightly, he said, but the change only means customers are more knowledgeable about the equipment they are looking for.

Spread around is store are several pieces of familiar, red equipment. In fact, Blue Ox Equipment is the only Bush Hog dealer in Selma.

With business growing, Lightfoot said he is also hopeful about the future of Selma.

“I am invested in the community and want to see it grow,” he said.