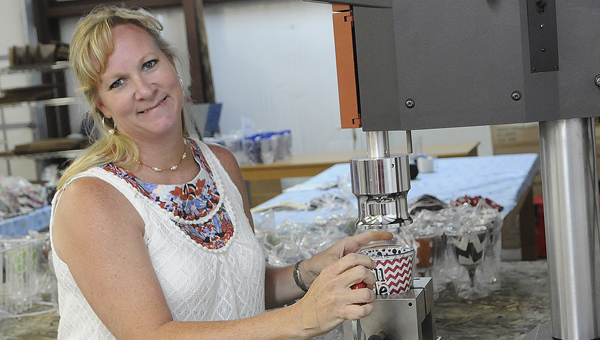 Killian Albritton always had a knack for sewing, but she looked at it as more of a hobby than a way to start a career. In 2006, a sewing “mistake” helped her turn her teaching career into a successful design business that sells products to stores nationwide.

Albritton had been asked to make several inexpensive gifts for a baby shower, so she made a change purse, but the purse was too small. She was prepared to start over, but her sister saw the purses and recognized them as coozies — and they worked perfectly.

The coozies became so popular, Albritton went to markets selling them and eventually started selling other products as well. She taught during the day and sewed during the night, but when she became pregnant with her second child, Emmy, she knew it was time to make a career change.

“Who really gets to do what they love?” Albritton said looking back. “When I was pregnant with our second child I knew it was now or never. It was now or I would never know if it would have ever worked.”

Albritton started Mee Too, giving up teaching and starting a full-fledged designing career.

Now, the company has quietly sold to more than 2,000 stores nationwide and has licensing agreements with more than 50 colleges and universities, but because she hasn’t changed, Albritton said most people probably do not realize how successful the business has been.

“Really, nobody in Selma knows about me and this,” Albritton said. “I guess it’s because I don’t do anything different than what I would’ve done the day before I started it.”

The company has seen its up and downs in its eight years, including last year when Albritton’s husband, Emmett, was diagnosed with cancer. But it has also helped Albritton go places she would have never been without it.

“A business is 24 hours, 7 days a week,” Albritton said. “It has taken me a lot of places I would have never been as a school teacher.”

Albritton said the key to her business is always staying a step ahead on the design market. So far, she said she has been able to do that, just by creating products that she loves.

“I just do things that I like and then I hope for the best, and thank goodness it [has worked],” she said.