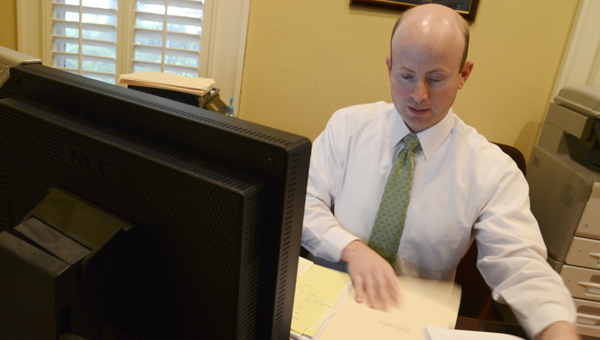 About 10 years ago, Chris Griffin came back home. It was a decision that he was certain of even before college graduation.

“There was never really any doubt that I was going to come back home,” Griffin said. “All of my friends were going to the big cities and I came back to Selma.”

He graduated from Meadowview Christian in 1996. Initially, Griffin saw his career path leading toward forestry or wildlife management.

He is still an avid outdoorsman, but his career path evolved differently than initially planned. Instead of romping in the woods, Griffin spends his days a few hundred yards from the historic Joseph T. Smitherman Building.

After graduation from Meadowview, he attended Wallace Community College for a brief time and eventually transferred to Auburn University. As his college career progressed, Griffin developed an interest in finance and business administration.

“I got into finance through business courses,” Griffin said. “Once we got into some courses, I found out that I really enjoyed it and focused on it.”

“Our goal is to help our clients plan for the future,” Griffin said. “It’s so much more than picking a stock and making money. Plans are often multi-faceted.”

Griffin said the Boyd Financial Group isn’t a big city firm, but offers many of the same tools.

“Everything a big city financial planning group can do, we can do right here in Selma,” Griffin said.

In his 10 years, Griffin said he has gained a wealth of knowledge about various aspects of the investment planning process.

“I’m constantly learning and really can never stop learning,” he said. “Coming out of college, I quickly discovered there are so many different parts of the business and you have to stay knowledgeable.”

In addition to his work at the Boyd Financial Group, Griffin is also a committee member of the National Wild Turkey Federation’s Blaster Chapter, which is based in Selma. He is also a board member of Little Friends School, where his son, Riley, is enrolled.

Nicke Horne III Ever since Selma resident Nick Horne III was in elementary school, he has known exactly who he... read more