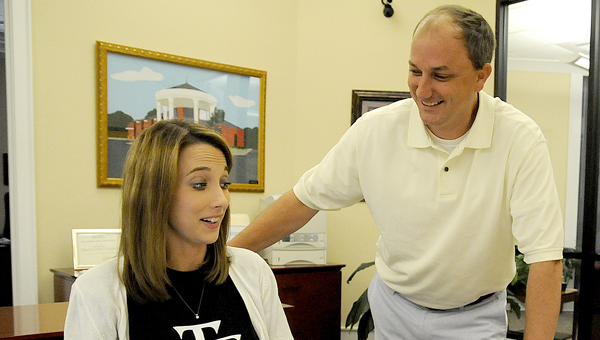 Brennan Nedley is not what you would expect from the outside looking in. Nedley, 37, is currently the chief operating officer at First Cahawba bank, and for him, it is a way to give back to the community.

“There was a group of nine that decided to do it,” Nedley said. “I got onboard with them a few months after they decided, and I left a really good job to take a chance for this. We started this bank seven years ago, and we reinvested in Selma. We give jobs to 24 employees; that’s 24 families impacted. We’re just trying to get the community thriving, and keep it thriving.”

While during the week you can find Nedley at the bank, on Sunday mornings you can find him teaching a Sunday school class full of high school seniors at First Presbyterian Church. To him, that is truly his reward.

“This is the first year I’ve done it, and just getting to know them from day one to where we are now has been great,” Nedley said. “They’re just awesome. They love the Lord. They love learning about the Lord. They really are just awesome kids. Just being able to watch them grow and develop has been really fun. I look forward to being with them every Sunday morning.”

The church had not had a Sunday school teacher in some time, but asked Nedley, and he took a chance.

“Honestly, it’s probably been better for me than it has them,” Nedley said. “They’ve taught me more than I think I’ve taught them. I think they feel real comfortable around me. We get to talk about things, and you just try to guide them in the right direction.”

But when Nedley is not spending his time with his Sunday school kids, he’s probably out doing yard work.

Nedley can be called a selfless man, and for him, this selection is an honor.

“To be selected by your peers, it’s just a confirmation that you’re doing something positive in the community,” Nedley said. “I just try to live each day and try to be a better person each day and treat others fairly.”

Joe O’Quinn After being raised to be caring and giving to those around him, Selma resident Joe O’Quinn said his... read more