Homegrown Talent: Local fiddler fell in love with music at an early age 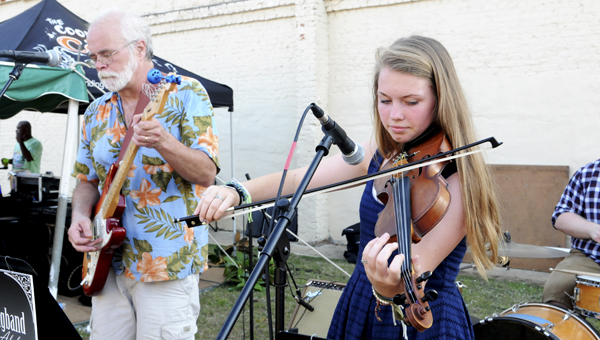 Veigh Kaye Spencer plays fiddle for The Grasshopper Stringband at the Jazz on the Grazz festival in Selma.

While enjoying a day at the lake, listening to some old-fashioned fiddle music on the radio, Chip and Laura Spencer lost sight of their 2-year-old for about 30 seconds. They found little Veigh Kaye sitting on a concrete block, playing an imaginary fiddle made out of two small sticks.

“That was really the first sign that she had shown being interested in music,” Chip said about his now 14-year-old daughter.

Musical talent runs in the family, dating all the way back to Veigh Kaye’s great great great grandfather, a renown fiddle player who was nearly shot while performing at an establishment in Uniontown in the early 1900s.

Chip said once he saw signs of interest, he researched the best ways to teach young children music. He stumbled upon the Suzuki method, which was modeled after the way children learn their first language.

At 4 years old, Veigh Kaye was signed up for violin classes at Birmingham Southern College — the only place that taught the Suzuki method.

“I remember my first lesson.,” Veigh Kaye said. “I was 4 years old, and I walked into a big room at Birmingham Southern with my tiny violin. It was scary because of all the older people there.”

Veigh Kaye never let fear get in the way of her music, even at her first performance in front of a large crowd.

“My very first recital was a big performance, and I remember being extremely nervous,” Veigh Kaye said. “I was crying, and Poppa gave me a little piece of wood. It was a fiddle peg from my great great grandfather, and Poppa said to keep it in my sock for good luck.”

Veigh Kayes first recital was one of many successful performances over the years. Veigh Kaye performed in several competitive groups, attended conferences and took lessons from some of the most sought after teachers available.

Veigh Kaye’s parents said it was under the instruction of Jubal Fulks at the University of Alabama where her talent flourished.

“We started back in 2011, and we worked together for several years,” Fulks said. “The best thing about her as a student was she was always curious. Even though she was only 11 years old, I could talk to her about advanced concepts, and she would be interested and want to know more.”

Veigh Kaye impressed Fulks with her interest in difficult concepts, like phrasing and how pieces from different eras should sound, but it was her work ethic and her family’s commitment that set her apart.

“She was a student with a great work ethic. She would always spend the week working on what we had talked about and come back with questions,” Fulks said. “The commitment of her parents to drive all the way to Tuscaloosa every week for lessons, it’s a big part of that process and her success.”

Music has always been important to Veigh Kaye and her family, but schoolwork has never taken a backseat — instead, it was completed in the backseat.

“We would check out for a half day, load her stuff up, do her work all the way up to Birmingham or Tuscaloosa, have her lesson, then do her homework in the car all the way back home,” Chip said. “No matter how much you throw at her, she will find a way.”

Alongside her lessons, Veigh Kaye has professional experience. She joined the Grasshopper Stringband two years ago, and has been performing on stage with her father, who plays upright bass for the group, nearly every weekend since.

““I like going to new states and traveling with the band all the time,” Veigh Kaye said. “It’s a great experience.”

It was on stage with the Grasshopper Stringband where Veigh Kaye was first noticed by a benefactor from the Alabama School of Fine Arts.

After an arduous audition process, Veigh Kaye received the news about a week later.

“The audition was not my best. I thought I completely bombed the audition and wasn’t going to get in,” Veigh Kaye said. “But a week or so later, I was performing with the stringband, and the announcer read my acceptance letter aloud. I was very happy, but very thankful it was nighttime because I was so red in the face.”

Veigh Kaye will attend the Alabama School of Fine Arts in Birmingham starting in August.

Chip and Laura said while they are a little worried as parents, the move to Birmingham is the best thing for Veigh Kaye.

“We are in a vacuum as far as fine arts are concerned here,” Chip said about the farming family’s home town of Marion Junction. “From marion junction where we don’t even have a stop light to the intersection of I-65 and I-20,It is totally different environment. I feel like it’s going to change her life.”

Laura said even as a concerned mother, she was excited about the chance for Veigh Kaye to get the best education available and develop her talent.

“It was never argumentative,” Laura said. “We were just torn because I can’t be the mother hen and protect her but keep her from these great opportunities.”

Veigh Kaye said the rapid change in environment will be difficult, but she’s eager to move to Birmingham.

“It’s going to be a huge change because on the farm we are self sufficient, but I’m going to be living in a big city, so it will be very different,” she said. “I’m already planning the food I’m going to eat.”