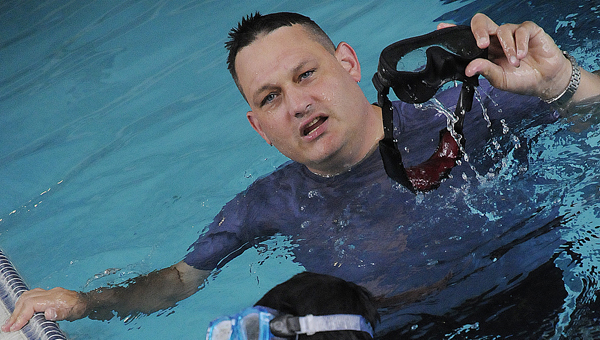 Scott Haskell, top, is having a lot of fun teaching swimming classes at the YMCA of Selma-Dallas County this summer. Haskell, who is retired from the U.S. Navy, is now a Dallas County sheriff’s deputy.–Daniel Evans

Scott Haskell spent over a decade as a rescue swimmer in the U.S. Navy, and has spent the majority of his life around water. Now, he’s trying to give back by sharing his aquatic skills with the Selma community.

After spending 20 years in the Navy as a rescue swimmer and drill sergeant, Haskell is spending some of his free time teaching swimming lessons at the YMCA of Selma-Dallas County.

“This is the one way I can use what the government taught me to give back to Selma,” Haskell said. “That’s why I’m doing it for free, and why I don’t charge anybody for anything. I don’t want to.”

Haskell works as a sheriff’s deputy for the Dallas County Sheriff’s Department, and one of his goals is to help showcase all of the positive things going on at the YMCA of Selma-Dallas County.

“We have got to get the YMCA back on the map,” Haskell said. “I don’t like to complain about something without coming up with a solution. My solution was maybe I can use my expertise to help fix the problem.”

Haskell deploys several unique teaching methods to help the children relate to what he is teaching them.

One of the lessons involves swimmers holding a 10-pound brick to show why it is important to stay calm in the water and not panic, because movement outside the water pushes weight down.

“I try to teach these kids the more movement you make out of the water, makes you go under the water,” Haskell said.

He also uses games, like swimming through an underwater hula-hoop, to keep swimmers engaged for his hour-long swim classes.

After starting with an undesignated label, Haskell worked his way up the ladder and eventually became a rescue swimmer.

“In my career, I recovered three people and had one live rescue,” Haskell said. “I was part of a recovery mission in Iraq during the war. We recovered a sailor that had crashed and been shot down and the rest of them have been during peace time.”

Now that he’s retired from the military, he’s taking time to give back and the YMCA couldn’t be happier about it.

“When he came in my office and told me his story, he won me over,” YMCA chief executive director Ann Murray said. “It was unbelievable. His testimony of all the children he has taught and all the different areas he has been and his willingness to spend time on a volunteer basis teaching the children of Selma to swim is astounding.”

Haskell’s wife, Lynn, is also volunteering. She teaches a water aerobics class at the YMCA and occasionally helps her husband with his swimming classes.