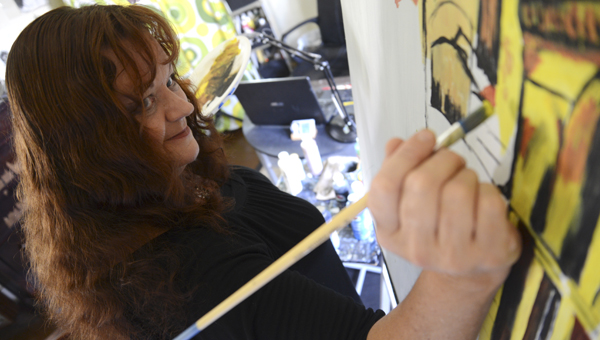 Like any artist, Plantersville resident Kathleen McQueen Wright finds inspiration in the people and places around her.

In recent years, Wright said she has found more and more inspiration from the youngest members of her family.

“I find so much of my inspiration through my grandchildren,” Wright said. “They are so creative. Their imaginations are just off the cuff.”

Wright has dozens of her pieces hanging on the walls of her home, and it’s clear to see the youthful imaginations of her three grandchildren has rubbed of on her.

While colorful drawings and paintings line many walls, Wright has adorned several walls floor-to-ceiling in murals modeled after beautiful scenes from vistas around the world.

“When we were first renovating the house, I got tired of painting the walls and ceilings, so I started doing all these murals,” Wright said. “I’ve really gotten into that.”

A professional in pen and ink, oils, acrylics and watercolors, Wright said she would be hard pressed to pick a favorite medium.

“I couldn’t pick a favorite medium because I like change,” Wright said. “Some artists stick to one medium, because it’s all about what you are comfortable with. I’m just comfortable with change.”

A self-taught artist, Wright said her creativity does not depend on the time of day or availability of materials, but rather, on a spark of inspiration.

“Sometimes I will wake up and 6 o’clock in the morning and work until 2 or 3 in the afternoon, and not even realize I haven’t had breakfast or lunch yet,” Wright said. “Other days, I can’t do it. I have to get inspired.”

Wright said she grew up in a family where creativity and the arts were all around here.

Wright, who describes her in-home studio as her “cave”, said she still keeps in contact with a grade school art teacher who taught her the basics.

“The only lesson I’ve ever had was from a sixth grade art teacher,” Wright said. “We are actually friends on Facebook. To this day, when he compliments me on a piece of work I still get excited. It’s like I’m getting an ‘A’ on the piece.”

By Christopher Edmunds The Selma Times-Journal A Selma man was arrested with pockets full of beer early Thursday morning. According... read more