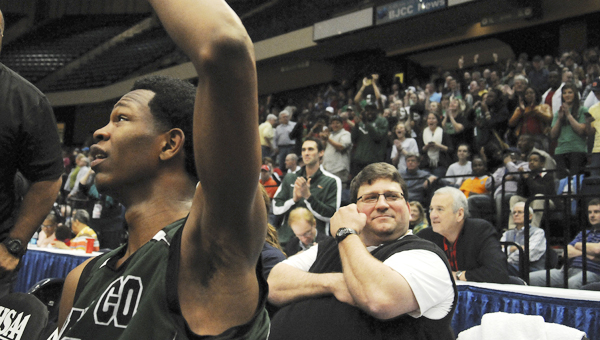 Smith, who coached John Carroll Catholic High School to back-to-back basketball championships in 2003 and 2004, was at the Birmingham Jefferson Convention Complex this year when Dallas County won the Class 4A championship. When the clock struck zero, Smith was one of the first to congratulate Hornets head coach Willie Moore, who has been one of his close friends for years.

“I enjoyed it more than [my championships],” Smith said. “I’ll never forget what I said to him when I hugged him. I said ‘You can take that monkey off your back now.’”

During the Hornets championship run, Smith scouted Dallas County’s upcoming opponents and helped create reports designed to slow teams down — things Moore has done for Smith in the past.

The two friends have always had that kind of relationship, where if they needed advice or wanted a second opinion on something they could pick up the phone and call the other.

Smith said his contribution to this year’s Dallas County basketball team was just reassurance, as Moore and the players were already on the right track.

“It was just the calmness effect of having somebody on that bench that had already been through it and had already seen what it takes to obtain that dream,” Smith said

Now, the duo will work together on a daily basis.

Smith was content to spend the rest of his days working in his family’s business — Bob Smith Construction Company — but then the opportunity to coach Dallas County became a reality and it was too good to pass up.

“After praying about it, I said what better place than to be around Willie and his family?” Smith said. “Then, there’s also the fact that you have a principal that understands what it takes to be successful in the academic world and also in the athletic world and is striving for that exact same thing in both avenues,” Smith said.

Smith coached at John Carroll for 15 years, Clay-Chalkville for one year and Southside-Gadsden for two years. Now he’s coaching a Dallas County football program that is on its 10th coach in 15 years and has gone 19-71 over the last nine seasons.

“I think the biggest thing is we can’t change the past,” Smith said. “All we can do is change the future. We can learn from the past. I think kids live up or down to expectations that are set for them and I think if you put high expectations there then they find a way to reach [them].”

Smith wants to work on having a disciplined team above all else, but once the Hornets do take the field he plans to run a pistol-wing offense.

“We do not have a problem with putting athletes in space and making you guard that,” Smith said. “In a week’s time, you’ve got to decide who has got dive, who’s got pitch and who’s got quarterback,” Smith said.

Smith said he does not like to punt the football and goes for it regularly on fourth downs. During one season at Southside-Gadsden, his team went for it on fourth down 48 times and made it 42 times.

The 11-and 12-year-old Selma All-Stars won the sub-district baseball tournament at Holtville earlier this week and will now move on... read more