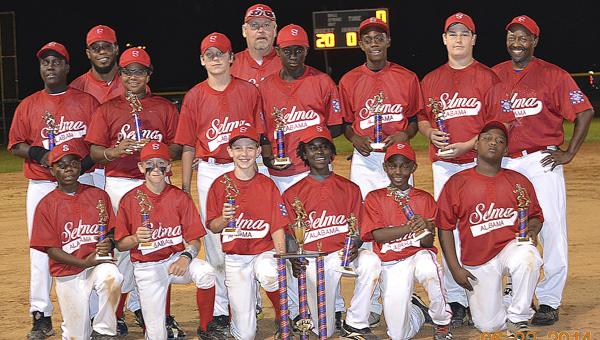 After watching his all-star team practice a few times, Selma head coach Ricky Waters wasn’t sure what to expect when the 11-and 12-year-old baseball squad took the field in Holtville earlier this week for the Dixie Boys Baseball, Ozone level, sub-district tournament.

Waters knew he had some great athletes on the field, but he was worried about how well the team could mesh together in a short period of time, and whether practices were indicative of the team’s overall ability.

It turns out he had nothing to worry about. The team dominated the north sub-district tournament, beating Eclectic 15-2 and Holtville 14-1 and 16-3 to win the tournament with relative ease.

“I had no idea [what to expect],” Waters said. “I knew they were well-rounded athletes, but I was kind of surprised for them to have team chemistry. It was like we had a lot of great athletes but they didn’t really practice that well.”

The team came to play, committing only three errors the entire tournament and hitting a total of nine home runs. In the championship game against Holtville, T’Darrious Olds hit two home runs, Osagie Aghedo added another and Xavier Green raced around the bases for an inside-the-park home run.

“They are really good with the bats and our pitching is real strong,” Waters said. “We have six starting pitchers and there isn’t much difference between all six of them.”

Olds, Aghedo, Green Adarricus Tate, Octavious Palmer and Tevin Craig pitched for Selma in the tournament. Green and Tate pitched in the championship game, helping shutdown a Holtville offense that couldn’t get going against Selma’s staff. In all, the Selma pitching staff had 22 strikeouts in the tournament as it kept hitters dazed and confused.

“Pitching is the key to any tournament,” Waters said. “At this first tournament, each pitcher was only allowed a total of 13 innings… Our pitching is our strong point. That and our ability to hit the long ball.”

The team’s next stop is Monroeville, where it will play in the district tournament in hopes of advancing on to the state tournament. The tournament starts Friday and will run through Tuesday.

Ellwood Christian quarterback Jalen Furlow looks towards a covered receiver in a 7-on-7 game against Hillcrest-Evergreen Tuesday at Southside High... read more