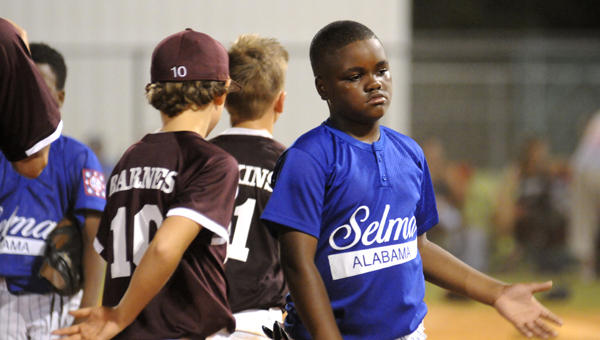 Hayden Roberts shakes hands with his opponents after a tough 10-0 loss at the Dallas County Sportsplex Friday night.

The Selma Blue and Selma Red 9 and 10-year-old district teams both fell to their opponents Friday night at the Sportsplex.

Selma Blue was shut out to Thomasville in a 10-0 loss. Both Selma Blue and Thomasville had quick first innings with players going three up and three down, but Thomasville was able to put two runs on the board in the top of the second.

Selma Blue had a chance to come back, getting two men on base in the bottom of the second, but left Nathan Tate on base after Jataveon Spears and Kemari Evans both struck out swinging.

Thomasville ran away with the game after scoring four unanswered runs in the fourth inning and another four runs in the sixth inning, sealing Selma Blue’s loss.

Ultimately, head coach for the Selma Blue all-star team James Spears said a lack of hitting was the team’s downfall.

Although Selma Blue lost, Spears had confidence that the team would be ready to play come Saturday night.

“I think we’ll bounce back pretty good and be back again Monday for whoever we play Monday,” Spears said.

Spears said the team had also come off a winning streak, and a game like that one might help ground the team.

“We played three games and blew everybody out, so we probably needed a game like this to get us back up,” Spears said. “To let them know that they’ve got to play baseball.”

Selma Red gained ground early scoring two runs in the first inning, but Grove Hill answered with three runs in the bottom of the inning including a homerun hit by Jaryian Jackson. Grayson Gibson added another home run in the fourth inning for Grove Hill.

“Both of them, they swing the bat well,” said Grove Hill head coach Tommy Davis. “They got a pitch they could hit, and they hit it out of the ball park.”

“They hit the ball hard,” Hand said. “They hit two out of the park and just out-hit us. We played decent until it got away form us there in the last inning or two, but we played a pretty good game. They’re just a really good team. I have to give all the credit to them.”

Selma Red will face Selma Blue Saturday at the Dallas County Sportsplex at 6 p.m., but Hand had confidence Selma Red would be better prepared to face the team they have lost to previously.

“They beat us in a couple of practice games, and they beat us pretty bad in finals in the

sub-district, but we’ll be ready for them,” Hand said. “These guys are all-stars. We’re proud of them. They can play ball. They’ll come out swinging the bats tomorrow night. I’ve got full confidence in them.”