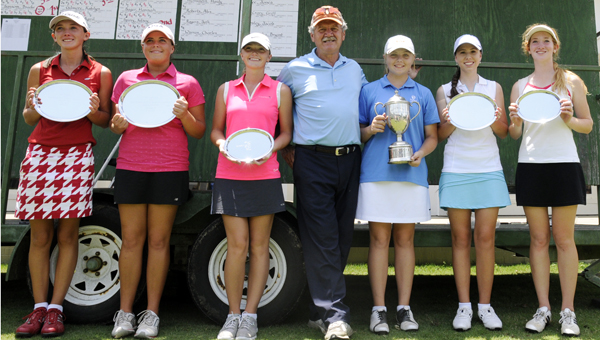 Play in the girls division for the 53rd Bud Burns Dixie Junior Golf tournament came to a close Tuesday at the Selma Country Club, but the boys division was just beginning.

The winner of the girls’ 13-15 age group was Brooke Samson, from Pike Road, with an overall score of 152 (+8). At just 15-years-old, Samson was also the overall winner for the tournament.

The winner for the girls’ 16-18 division was Ashton Maddaloni, 17, from Eclectic, with an overall score of 156 (+12). Like Samson, Maddaloni was not a newcomer to the tournament. This was Maddaloni’s fourth year competing in the tournament.

“I’m very honored because there are some good girls in this field, and I’m glad that my playing came through for me,” Maddaloni said.

Maddaloni, who has been playing golf since she was about 8-years-old, said golf was a contributing factor in the person she is now.

“I don’t think I would be the person I am without it,” Maddaloni said. “It’s really shaped me into the person I am. I just enjoy playing it and meeting new people.”

The championship age division, with players ranging in age from 15 to 18 will play a round of 36 holes. Tommy Burns, golf professional and superintendent at the Selma Country Club, said the weather would be a definite factor.

“It would be nice to get some cool overcast weather sometimes,” Burns said. “You’re walking 36 holes, which is basically 11 miles you’re going to walk. You’re gong to be in the hot sun. You’re going to be dehydrated.”

The tournament will wrap up Wednesday evening with the winners for each boys division being announced as well as the overall winner for the boys. The Paul Grist award, which honors a local player who is a well-rounded golfer will also be awarded Wednesday evening after all play is finished.

“What we do, we give that trophy to the local, Selma kid who is playing in the tournament that shows sportsmanship, hard work with character and citizenship,” Burns said. “If he’s not doing well in school, or minding mom and dad, then I don’t care how well he plays, he isn’t going to get the trophy.”

Sarah Battye, left, watches Ashton Maddaloni, right, get ready to take her swing on hole seven during the first round... read more