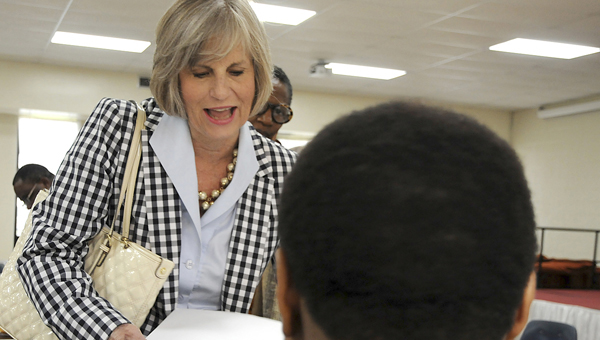 The BBCF awarded $200,000 in arts and community initiative grants to 92 non-profit organizations from 12 counties during their 2014 awards program as part of their mission to support community efforts in the region.

Nineteen Dallas County organizations collectively were awarded more than $44,000 in grant money during the ceremony.

“In order to make progress and to transform the region, we can’t do it all ourselves, but there are so many groups on the ground that are already doing it,” said BBCF president Felecia Jones. “We just decided to partner with them and help strengthen them.”

Since 2005, the BBCF has awarded over $2.3 million to non-profit organizations through its Community Grants program, Black Belt Arts Initiative program, and other grants.

Doris Holland, president of the Selma Community Concert Association, said her organization received a $3,000 grant, which they will use to provide concert tickets to students in the Dallas County area, as well as to Cahaba Center for Mental Health clients.

Holland said she immediately called the organization to let them know just how appreciative the Selma Community Concert Association is to be one of the organizations fortunate to receive a grant.

“For us to have that money means a lot,” Holland said.

Stephanie Coles, the education committee president at Trinity Lutheran Church of Dallas County, said the church was grateful to receive grants in both the community and arts initiative categories totaling $4,000.

Jones described the annual awards ceremony as a grand celebration for everyone involved.

“It gives us a chance to bring groups that otherwise may have not had a chance to get together.” Jones said. “They get to come together and learn about what the other is doing, and go forward from there.”

Although all that apply for the grants are not awarded the money, Jones said a huge percentage of the applicants are deserving of it.

“We have more worthy groups than we have money,” Jones said.

Retention rates on the rise at WCCS

Wallace Community College Selma saw a 30 percent increase in the 2013 to 2014 in its retention rates over the... read more