Taking time to enjoy the river 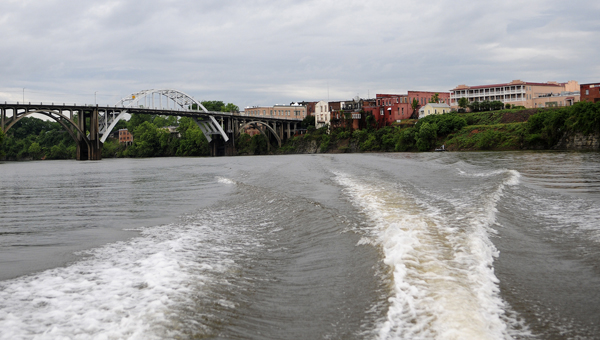 Selma’s iconic downtown riverfront and Edmund Pettus Bridge is seen from the back of a boat on the Alabama River. — Daniel Evans

There aren’t many outdoor activities people can enjoy in life when it is pouring rain outside, but Allen Bearden, Allen Reeves and AC Reeves learned the hard way that boating on the Alabama River is one of them.

During a weekend in early May, the trio planned a trip to float down the Alabama but Mother Nature had other plans and dropped more than two inches of rain on the Selma area that morning.

Not to be deterred, they still went on the trip because there was no lightning in the area, and because all three of them look for any excuse to spend a day on the river. Even on a rainy day, the Alabama River didn’t disappoint — delivering fun for all and several interesting sights to enjoy. 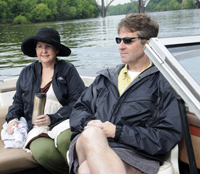 AC and Allen Reeves enjoy the river as often as they can, joining friend Allen Bearden on a recent trip down the Alabama River. — Daniel Evans

“If you are able to go and you have the time to go, that’s the time to go,” Bearden said. “You can always find a reason [not to] but it is always nice whenever you can to break away and disappear on the river for a little bit. Even in bad weather it is still a good time.”

Luckily for Bearden, he has two friends in Allen and AC who share a similar philosophy. Allen also spent a lot of his childhood on the river and after years of trying to talk AC into becoming a river fanatic, she has finally come around. In fact, AC may actually enjoy time on the river more than Allen enjoys his.

“It is good for my soul,” AC said. “I don’t know what the deal is with it. As soon as we make that lap out of the marina and I see downtown, it calms me down. I love it.”

AC and Allen enjoy early mornings and late afternoons on the river. They go before work, after long days and any time in-between where they squeeze in enough time to set sail on the water.

AC said when her children were younger, she was against time on the river. All she could think about were all the things that could possibly go wrong, but Allen convinced her to take a trip without the children, and it opened her eyes.

Now, she spends most of her time in the boat behind a camera lens, snapping photos of all the incredible sights she takes in while on the water.

“When we are on the river and we see an amazing sunrise or incredible sunset, I think ‘Oh my God, this actually happens every day and we do not pay any attention,’” AC said. “We either sleep through it or we have too much going on. This beauty is all around us and when you are on the river it is right in your face.”

Other sights are less common on the river, but show the world of nature that goes on when people aren’t around.

Bearden, who still drives the boat his uncle used to introduce him to the river, said it is important to him to get his children on the river. Jack, 5, has already grown to love the river and Hatch, 1, is bound to love the water after he gets a little older.

“That’s the whole reason for keeping the boat and maintaining the boat is to get them out there so they can experience things that I experienced,” Bearden said. “The 1-year-old hasn’t been but a time or two, but Jack has been many times and any time the subject comes up he is ready to go. He wants to go sit in the boat and play in the boat when it is sitting in the boat shed.”

Bearden said he can vividly remember one of his aunts holding him up so that he could ready to ski for the first time. Memories like that one come flooding back with he talks about the Alabama, which played a big role in his childhood. He said he wasn’t appreciative of them then, but looking back now he’s thankful for those memories.

“When I think back on the river growing up, I think of all of my family, my uncle, my cousins on the bank,” Barden said. “We would bring a picnic and put a watermelon right on the edge of the water to stay cool and just being out there all day with family, with nothing to do but be on the river. I’m very thankful that they did that for us.”

Tommy Atchison Growing up in Tuscaloosa and vacationing on the shores of Delaware, Tommy Atchison, attorney at Pitts, Pitts &... read more