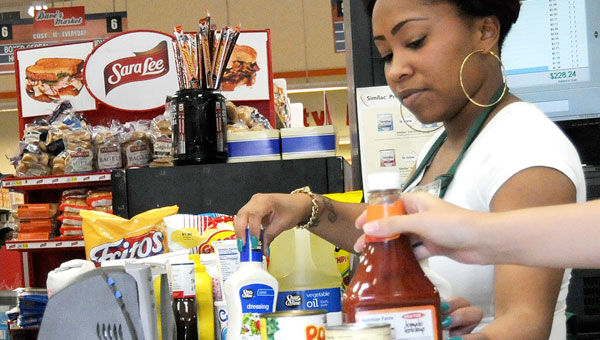 VALLEY GRANDE — A patch of Alabama Highway 22 in Valley Grande is quickly gaining a reputation as the city’s primary business hub.

Tom Lee, the shopping center’s developer and former mayor of Valley Grande, said he initially started the process of building the complex because of limited retail options in the city.

“At the time, there was nothing of a tax base or very little other than convenience stores,” Lee said.

After a few years, Dave’s has skyrocketed in popularly. Oliver says profits are about 10 times what they were in 2010. Lee said the store’s ranking in its grocery co-operative — Associated Grocers —has also increased. The store is ranked ninth overall in its division.

The restaurant opened in early 2013 after multiple other restaurants.

Valley Grande Mayor Wayne Labbe said the restaurant and grill are convenient for many of his city’s residents and are a sign of growth.

“As Valley Grande continues to grow, we are going to require more business,” Labbe said. “It’s exciting to see the city grow. We have got a wide span of area to cover as far as the city of Valley Grande.”

Because of the shopping center’s increased traffic, Lee said he is beginning to expand the parking lot and looking at adding another restaurant to the area.

“What we don’t have is some type of breakfast offering,” he said. “I think that would be a huge opportunity.”

Renosol, located in Craig Field’s industrial park is scheduled for a union vote on June 19 and 20. If more... read more