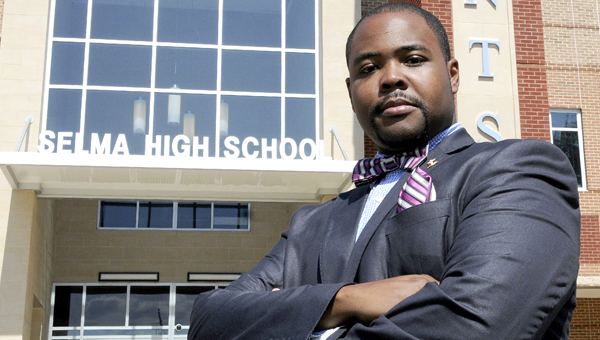 For the second consecutive school year, Selma High School will have a new principal.

After serving as a principal of Clark Elementary principal for five years, Aubrey Larkin Jr. has been named Selma High’s new principal. Larkin said he’s excited about his new position.

“It feels wonderful,” Larkin, who will be overseeing approximately 900 Selma High students, said. “I’m very excited to work with the faculty here, the staff, the students and the parents.”

After graduating from Selma High in 2000, Larkin attended Tuskegee University for two years prior to completing his bachelor’s degree in business administration in 2004 at Auburn University.

From 2007 to 2008, Larkin earned his master’s degree in childhood education and education administration certification from Auburn University at Montgomery.

Larkin replaces former Selma High principal Major Burrell, who was transferred to take the principal post at the School of Discovery.

Burrell replaces Jacqueline Walker, who retired after serving two years as SOD’s principal and 40 years as an employee of Selma City Schools.

“I felt like his skill set was a better match for a little bit of a smaller school,” acting Superintendent of Education Larry DiChiara said of Burrell’s move to SOD. “So we moved him to the School of Discovery.”

For Larkin, the new job opportunity is a chance to be a part of greatness.

“As a product of this school, I know that there’s greatness here,” Larkin said. “I’m just blessed and grateful to be a part of that greatness that’s here at Selma High.”

Larkin said the Clark Elementary staff and faculty would always be part of his family.

“They are forever etched in my heart,” Larkin said. “We are truly a family over there, but now I have an opportunity to work with a new family of people that are doing the same thing, which is educating children.”

More details about the school system changes will be featured in Saturday’s edition of The Selma Times-Journal.

The site of the former Stewart-King-McKenzie Building is home to scattered bricks and other building materials. The building was demolished... read more