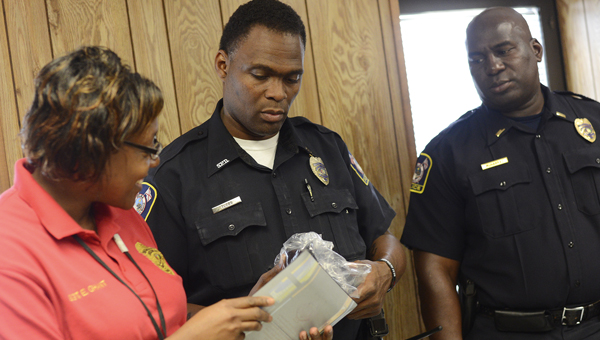 Three members of the Selma Police Department were recognized for rescuing a woman who attempted suicide last June.

On June 24, 2013, the three officers responded to a call stating a woman had attempted suicide by jumping into the Alabama River from a rocky ridge near Water Avenue.

The three police officers headed to the marina, commandeered a citizen’s fishing boat and pulled the woman from the river before resuscitating her. She was transported to Vaughan Regional Medical Center for medical treatment.

Wednesday, Hawkins thanked the officers for their actions.

“This heroic act by you officers demonstrated the importance of the quality training police officers must endure,” Hawkins said. “This achievement of saving a life, is a prime example of the dedication and willingness of law enforcement officers all over the nation. We thank you for what you have done.”

The trio was officially awarded the honor during the International Boating and Water Safety Summit in Nashville, Tenn. in mid-April.

For Ghant, the department’s response to the call last year was nothing heroic, but rather, it was something they had been trained to handle.

“All three of us are dedicated to our job, and we enjoy doing our job,” Ghant said. “We just wanted to do our job and make she was safe that day. That’s all we were thinking.”

Tubbs said doing whatever it takes on the job is something all members of the department are ready and willing to do every day they put on the uniform.

“I really didn’t expect this honor today.” Tubbs said. “Just like any new recruit would, what the three of us did that day was just part of our job.”

Muhannad said the officers all responded as their training had prepared them, but he said the rescue was made possible by the cooperation of J.R. Lowe, who allowed the officers to commandeer his boat.

“We want to make sure and thank the family, the father and son, who let us use their boat to help us get out there and save her,” Muhannad said.

“They didn’t hesitate. It was all about the police and the citizens of Selma working together.”

Selma Chief of Police William Riley said he took pride in the actions of the three department personnel last year.

“People sometimes don’t realize everything officers do and go through while on the job,” Riley said. “They don’t hesitate to save other people and they do it without forethought. It’s just what they do, and I’m very proud of these three and their actions.”

The Selma City School board approved the proposal to convert a school of about 100 elementary students to an early... read more