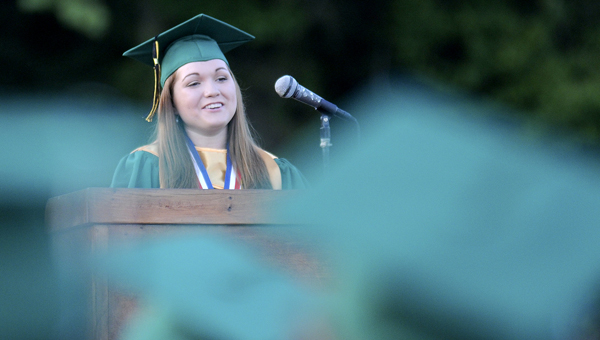 Tayler Fancher, the valedictorian for Dallas County High School’s Class of 2014, delivers her speech during her class’ graduation ceremonies in May.–Daniel Evans

Editor’s note: This story is the next in a series by the Times-Journal focusing on each of the valedictorians from the seven high schools located within Dallas County.

Fancher, who graduated with grade point average of 4.03, said accomplishing the high school goal she has had since the 7th grade makes her less doubtful about performing well academically in college.

“I was so excited. It was crazy, because I knew it was close,” Fancher said.

Enrolled in the University of Alabama with a $37,800 scholarship, Fancher will major both in marine sciences and biology.

“I really like Shark Week, so my main goal is to study the sharks and try to limit human and shark interaction,” Fancher said. “I want to find out where they swim, and get on Shark Week.”

Fancher realized just how intimidating college could be when she attended freshman orientation at Alabama. When Fancher discovered how brilliant the other students were, she began to value her accomplishment even more.

“I’m glad I was valedictorian,” Fancher said. “It gave me a big confident boost going in because without it I don’t think I’d be able to handle all the pressure.”

“To me, academics is something really big,” Fancher said. “Some people get into sports and stuff, but school has always been my strong suit.”

Golden Ranch Bar-B-Q was awarded a certificate of appreciation Wednesday for its fundraising efforts to benefit children and adults affected... read more