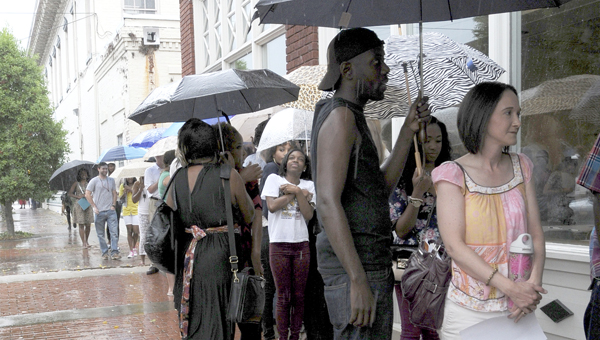 Those interested in being chosen as extras in the upcoming filming of the moving ‘Selma’ wait just outside the Performing Arts Center Tuesday. The rain did not stop more than 500 from turning out for the casting call. — Scottie Brown

The movie ‘Selma’ might carry the name of the city, and thanks to a Tuesday casting call, the movie will now have plenty of Selma residents taking part.

Several hundred hopefuls weathered the elements Tuesday in hopes to receive a part as an extra in the upcoming production of ‘Selma.’ While many of those who auditioned Tuesday afternoon had to wait through the rain, Cynthia Stillwell, the casting director for the movie, was pleased with the turn out of participants.

“We have had an outstanding response,” Stillwell said. “I think we’ve seen maybe close to 500 people today, which is amazing. People have been so responsive and enthusiastic. They’ve been respectful. They’ve gone through the process beautifully.”

Daroderick Sallie, a 20-year-old Selma resident, was among those who went through auditioning process.

“I’m really thankful,” Sallie said. “I’m really glad that I get the opportunity to be in the film and experience it, and meet people I have never met before who have been in the civil rights movement and learn about their experiences.”

Sallie waited outside of the Performing Arts Center on Selma Avenue for a little more than two hours before the doors were opened Tuesday at noon, but most of his preparation was done before he even arrived Tuesday.

“I did a little research on how they dressed back in the day,” Sallie said. “I went to Goodwill and I saw this particular outfit and I was like ‘mom, I think this would be a good idea to wear this.’ She said ‘go for it,’ and I just decided to.”

Sallie said those auditioning learned a lot of what would be expected of them on set if they were chosen for a role as an extra.

“Everybody will be treated equally as artists and actors, so there’s no unequal part,” Sallie said. “Everybody has an equal part of the film.”

Other hopefuls, like Darell Elem, who waited for about an hour and a half before getting to audition, said he thinks more than just those in the movie will be able to gain something from ‘Selma.’

Those who tried out to be in the movie will be contacted no later than Sunday to find out if they have a part in the film. Stillwell said she has been blown away by the hospitality she and her crew have received during their time in Selma.

“Thank you for welcoming us,” Stillwell said. “Thank you for opening your homes and your streets and your hearts to us because we want to really do this the best way we can.”

By Scottie Brown The Selma Times-Journal   Nurses from the Selma and Dallas County school systems will take part in... read more