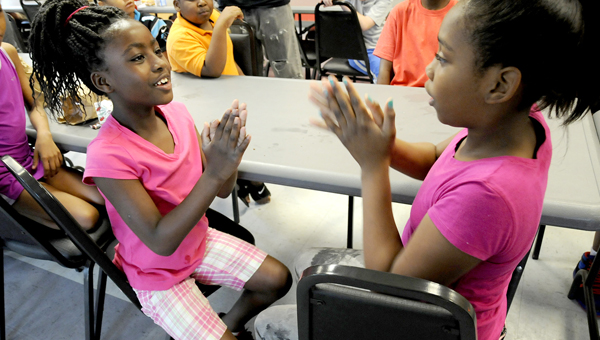 Jordan Weatherly, left, and Makenzi Woods, right, play a hand-clapping game together after lunch while waiting to go do their next activities during the YMCA’s Summer Adventure Camp. (Scottie Brown | Times-Journal)

For the first time since 2010, The YMCA of Selma-Dallas County is hosting its Summer Adventure Camp program.

The camp is set up for children ages 4 through 12 and provides the participants with activities modeled after the YMCA’s mission.

“We’re hoping it’ll be a help to the Selma community to have a program that is effective for the summer, especially for parents that work, and that can offer the children something they will enjoy and learn from,” said Sondra Tate, the camp coordinator co-chair.

The program, which runs from June 2 to August 8, is held at the YMCA and children within the program have the opportunity to not only have fun with activities and games, but to keep up with some of their school work through the camp’s enrichment time.

“We’re doing things to keep them abreast on their reading and their math this summer,” said Melissa Milligan the camp coordinator.

The Adventure Program currently has 35 children in it, but that number will vary over the summer as some children rotate in and out of the program for different reasons. However, Milligan seems pleased with the turn out.

The YMCA is aiming to make it a fun yet educational summer for their participants.

“We just really want to see the Y thrive,” Tate said. “We’re really teaching what the Y stresses. We are teaching them Christian life skills and character development. Plus, we’re teaching them team building.”