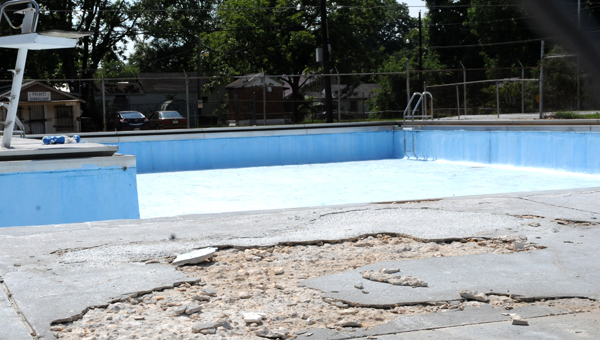 Selma residents will have to enjoy the summer heat without taking a dip in the city’s only publicly owned pool.

The William H. Dinkins Pool, located on the corner of Dexter Avenue and Division Street, won’t open this year after city officials expressed concerns about the pools current condition.

“The sides of the pool are broken up like rocks, even inside of the pool,” Ward 8 councilman Michael Johnson said. “We can’t open up without doing some kind of work. The children would be running around there with sharp rocks and broken up concrete just laying around.”

Interior parts of the pool are also cracked and broken. Smashed liquor bottles also lay around the pool’s exterior.

The city built the swimming pool in the 1970s. It opened regularly during summer months. More recently, parks and recreation director Elton Reece said the park opened only during June and July. The city performed regular maintenance just before summer months and slathered a fresh coat of paint on the pool every two years, Reece said.

Johnson and Reece decided a new coat of paint wouldn’t be enough to ensure the pool is able to open and subsequently decided to close the swimming pool for the summer. Safety is just part of the reason for the closing. Reece said motors and pumps are also aging and in need of repair.

“It’s to the point where it needs a lot of work to get functional and safe,” Reece said.

June and July 2014 will be the first time in recent memory that the pool hasn’t opened for the summer, Reece said.

It closed briefly for a month several years ago after criminals stole copper from the pool house, but residents donated money to make needed repairs.

The pool didn’t result in massive profits, because of the low cost of entry. Money has recently become concern, with Reece and Johnson considering a solution to the pool’s dilapidated state.

The estimated cost of replacing the pool is $30,000 and Reece said repairs would cost nearly as much as new construction. The Dinkins pool reaches 12 feet in some parts, which is rare for many commercial pools Reece said.

“There is a tremendous expense with a pool that big,” Reece said. “In my budget, we just have enough to take care of it.”

A future plan for the pool hasn’t been determined, but Johnson said he preferred to leave the pool closed for this summer and make repairs.

Regardless of the closure, Reece said a city-owned pool is needed in Selma.

“It’s not a huge money-maker, but it’s one of the things that citizens need,” Reece said.

Jordan Weatherly, left, and Makenzi Woods, right, play a hand-clapping game together after lunch while waiting to go do their... read more