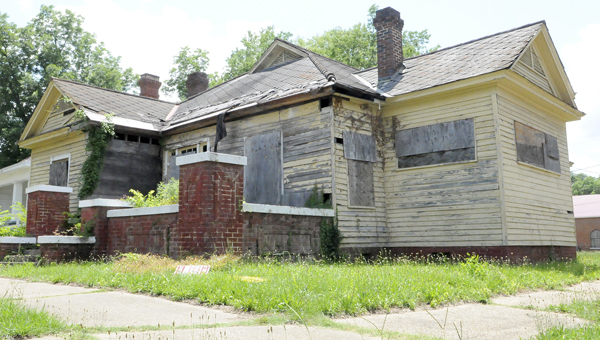 While city leaders consider renaming Lapsley Street for Amelia Boynton, her former house was placed on a list of the state’s most endangered places. (Christopher Edmunds | Times-Journal)

The Alabama Trust Historical Preservation and the Alabama Historical Commission has listed the former Boynton family residence as a “Place in Peril.”

Places in Peril is a list of the state’s most endangered historic places and was released by the Commission earlier this week.

The house first appeared on the list in 2008, but its condition worsened since then.

“We have photographs from 2008 when the house first showed up on the list, and the house is obviously deteriorating,” said Michael Panhorst, who coordinates the Places in Peril program. “The roof and exterior fabric have been compromised, and water damage now threatens the structure. The house is unsecured, so there is also a risk of theft and vandalism.”

Since it began in 1994, 221 places have been featured on the Places in Peril list, and 70 have been preserved or restored. Panhorst said although the list offers no formal protection, and only one third of the locations have seen improvements, preservation is not always about numbers.

“It’s qualitative rather than quantitative,” Panhorst said. “It’s not practical to save every old building, but those of exceptional historic and architectural significance deserve preservation. The Boynton House has extraordinary significance to the history of the civil rights movement, especially in Alabama.”

Panhorst said the house is in its current condition because of years of neglect by its owners.

The house most recently changed hands in 2009 when it was sold by the National Voting Rights Museum to the Atlanta-based Gateway Educational Foundation.

Jim Brown, founder of the Gateway Educational Foundation, said the house was in bad shape by the time Gateway was able to purchase it.

“The Boynton House was in deplorable condition when purchased by Gateway,” Brown said. “When a walkthrough was done by Gateway, it was evident that the homeless and drug users had taken up residence.”

Brown, who was involved in much of the civil rights history that took place in the Boynton house, said he remembers the place vividly, and it was difficult to see the home in such rough shape when he did the walkthrough.

“I cried,” Brown said. “I was there in ’65. I knew the history of the house, so I couldn’t believe that people let this happen.”

Brown said his group has had difficulty raising the necessary funds to restore the house.

He said $20,000 has been raised so far, including the $15,000 needed to purchase the house in 2009 from the Voting Rights Museum. Brown said nearly $8,000 worth of improvements have been made to the house since its purchase.

According to the Gateway Educational Foundation’s plan for the Boynton house, the project still has a long way to go. The total cost of restoration is projected at  $945,000.

According to the plan, the Boynton house is expected to be a fully functioning wax figure and civil rights artifact museum by July 2015.

Brown said the wax museum installation was a direct request from Amelia Boynton.

The Boynton house is located in Ward 7, which is represented by councilwoman Bennie Ruth Crenshaw.

Crenshaw, who recently proposed renaming the street the house is located on to Boynton Street, said the Selma City Council has been approached about aiding the restoration efforts previously.

“Mr. Brown presented to the council several years ago,” Crenshaw said. “For some reason, the same interest wasn’t taken in the Boynton house as Jean Jackson’s house on the same street.”

While Crenshaw said the city has not been involved in the restoration efforts of the Boynton house, Panhorst said immediate action is required to prevent a worst-case scenario for the house.

“If the building is not secured and made weather tight soon, it will continue to deteriorate, and restoration and repair costs will continue to mount. More and more original building fabric will be lost, so the project will become less repair and more reconstruction,” Panhorst said. “The worst case scenario would be a vacant lot with a historical marker rather than an old house that still retains most of its original fabric.”

Police swarmed to the old Dallas Academy building early Friday afternoon after a man pulled a knife on a woman... read more