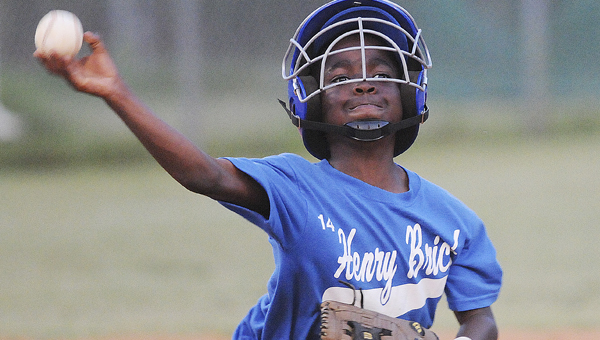 By Scottie Brown
The Selma Times-Journa

A 4-run fourth inning spurred Wood Orthodontics to a 6-4 win over Henry Brick Thursday night at the Dallas County Sportsplex, setting up a winner-take-all game for the 7-and 8-year-old championship between the same two teams Friday at 6 p.m.

“All year, our bats have been really great,” Wood Orthodontics head coach Bob Frazier said. “Our guys could keep hitting the ball, keep hitting the ball, and from the beginning of the year our assistant coach, coach Palmer said, ‘defense wins games championships,’ and tonight they played one of their best defensive games.”

The defense came up big with the game on the line.

After Henry Brick had closed the gap to 6-4 after scoring two runs, Queinderious Chambers stepped to the plate in the final inning with two runners on base and two outs.

Chambers ripped a hard hit ball towards Wood Orthodontics shortstop MJ Reese, who snagged the sharply hit ball and threw to third to end the game.

Henry Brick head coach James Spears wasn’t happy with his team’s performance, but knew they would get another chance Friday night.

“That score should have been 4-0 our way,” Spears said. “They got six runs off of errors. They played a good game, but we had too many errors.”

Before taking on Henry Brick in the 7-and 8-year-old baseball finals, Wood Orthondotics had to get past Lewis Brothers.

Unlike their game verus Hengry Brick where Wood Orthodontics’ defense led to a win, the team used a great offensive showing for a 14-4 victory over Lewis Brothers.

A 4-0 lead for Lewis Brothers quickly went by the wayside, leaving head coach Andre Lamar wondering what might have been.

“We had long innings to where we couldn’t get three up, three down, and against a team like that they’re going to hit the ball,” Lamar said. “You’ve got to be able to get three outs and you can’t just make simple errors.”

WCCS pitcher Simmons is not nervous about MLB Draft

Although he doesn’t have butterflies yet, Kevin Simmons expects to feel them Friday while he waits to see if his... read more