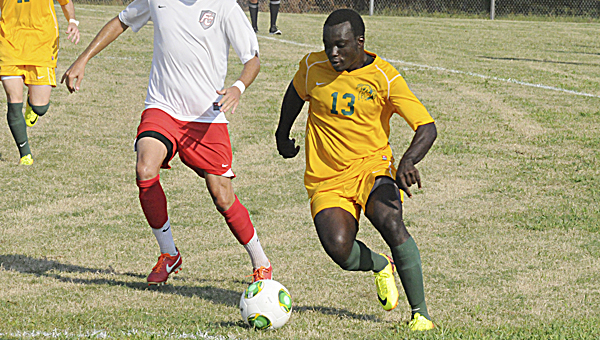 Emanuel Stephens is the new soccer head coach at Concordia College Alabama. Last season the program went 4-2-3. Stephens, who coached the Hornets in 2012 and led the team to an 11-4 overall record, is back for his second stint as Concordia head soccer coach.–File Photo

“I am excited about the changes the school is making with the new field on-campus and some new academic standards that they are putting together,” Stephens said.

After leaving Talladega College to be closer to his wife, Stephens has his sights set on turning around a Concordia soccer program that compiled a 4-2-3 record last season.

“When I was here last time, the players knew first what they came to school for,” Stephens said. “They came to get an education, they came to have an opportunity to play the game that they love, but ultimately get education.”

Stephens, who is an Atlanta, Ga., native, graduated from Georgia Southwestern State University in 2008. He led The Walker School, a high school near Atlanta, to back-to-back state soccer championships. He spent time as an assistant soccer coach at the University of Sioux Falls before spending two years at Judson College.

Stephens said he expects to have around 12 different countries represented on the roster next season.

“How quickly can we mesh with all of the different personalities and different people coming in from all these different places?” Stephens said. “That’s a huge thing in itself as well. I have high standards and high goals and obviously want to get back to the national tournament in the first year. Is that realistic? Some would say no, but I have a lot of belief in my abilities and a huge part of it is the commitment from the school.”

One thing that may help Stephens is his familiarity with the Concordia soccer roster. He said he recruited many of the players that were on the team last season, giving him an idea of what their strengths and weaknesses are.

“I recruited most of them so I have somewhat a notion of who they are,” Stephens said.

Although a lot of the players are the same, the playing field isn’t. Concordia opened its new on-campus soccer field last season. Before last season, games were played on the football field at Memorial Stadium.

Concordia starts preseason training July 27. Before then, Stephens would like to bring in a handful of additional recruits to fill the Hornets’ roster.

In 2015, the school plans to start a women’s soccer program as well.

When Stephens was hired, the original plan was to try to have a women’s soccer program this year, but Stephens and the administration decided to wait a year based on how late in the year it is.