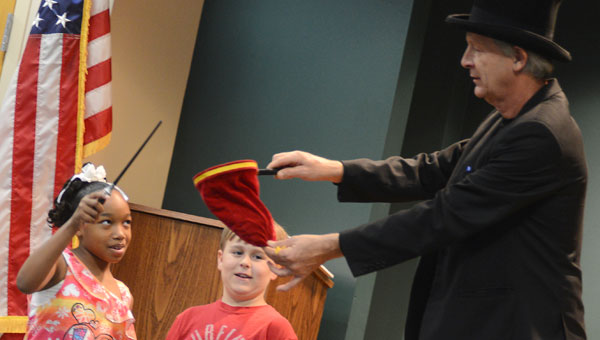 A crowd of over 150 turned out to watch magician Gary Ledbetter perform at the Selma-Dallas County Public Library on Monday. (Jay Sowers | Times-Journal)

The kickoff of the Selma-Dallas County Public Library’s Sensational Selma Summer was full of surprises Monday, as magician Gary Ledbetter performed for a captivated young audience.

Ledbetter, who has been performing since he was 15 years old, said he enjoys performing as much as, if not more than, his audience members.

“It’s hard to say who gets more out of it,” Ledbetter said. “I can do the same trick for three different audiences, and every time the reaction is different, because of the kids. You never know what they are going to do or say.”

Ledbetter, whose act revolves around audience participation, brought numerous children on to the stage Monday to help him with various magic tricks and optical illusions.

Ledbetter said the job has brought him much joy over the 35 years he has been performing professionally.

“I graduated from Auburn with a degree in electrical engineering, but this is how I got through college,” Ledbetter said. “So, when I graduated I kept doing this because I didn’t want a ‘real’ job. I’ve been to 20 different countries and 47 states.”

For library executive director Becky Nichols, Ledbetter’s love for his craft and audience has made him a regular during the annual summer program.

“He’s been a big part of our program for about 10 years because the kids just love him,” Nichols said. “Gary is one of the best magicians in the state of Alabama, and Sensational Library Summer gives many local children a chance to see a professional magician or other acts for the first time.”

Nichols said Monday’s crowd of 150 children was made up of many groups who had been attending are church camps and summer camps.

“Parents have enrolled their child in a local camp and the camps booked space here at the library. It’s a diversified group.

Selma resident Debra Towns brought her grandson, three-year-old Angelo Green, to the library Monday so the pair could both take in a magic show for the first time. Towns said this would not be their only stop at the library this summer.

“I wanted to bring him out here today so he could have fun and get to interact with the other kids,” Towns said. “I saw the poster full of all the activities they have planned for the summer. He’s with me for the summer, so I know we’ll be back for plenty of the events.”

A complete list of Sensational Selma Summer events can be found at the library, online at SelmaLibrary.org, or by calling the library at 874-1725.