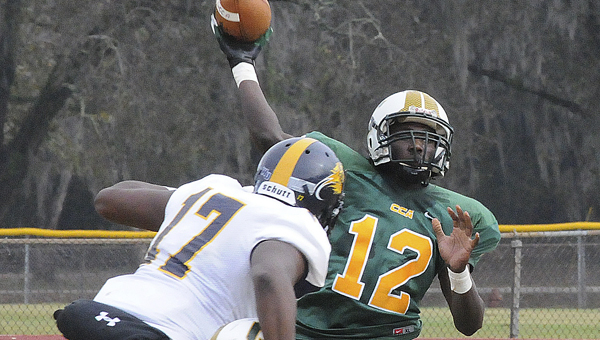 Although Concordia College Alabama athletic director Frankie Peoples is focused on helping turn the Hornets’ football program around and keeping the college’s other athletic programs on a winning track, he said he has more in mind that just that.

Peoples, who led Alabama Lutheran Academy and Junior College — which later became Concordia College Alabama — to a Class 1A state basketball championship in 1980, wants his programs to win on and off the playing field.

In the past, he has felt like the program might have focused too much on finding the next great athlete and not enough on finding students that actually wanted to be at the college in pursuit of a degree.

He said under his watch, that’s going to change.

Since his tenure started in January, Peoples has had to hire a new football coach.

Former coach Don Lee, who is now at Virginia University of Lynchburg, resigned earlier this spring and has been replaced by Stanley Conner.

He also had to dispel rumors that Concordia may not have a football team in the fall. Peoples said that would be a mistake and is untrue.

“I’m coming in here now as athletic director trying to fix a few minor problems so that we can have football and move football in the right direction,” Peoples said. “I know it will work if we can get football and do it right. We have to do it right.”

The direction the Hornets’ football program is moving is a different story. Right now, Concordia plays as an independent member of the United States Collegiate Athletic Association, which had a total of 11 football schools during the 2013 football season.

Peoples acknowledged that rumors have swirled through the years about Concordia joining a football conference and not playing independent football, but he knows the college is not ready yet.

“For us to do it right, we are just not there yet,” Peoples said. “That’s just my personal opinion. Would we like to get there? Of course.”

Peoples said the move is not only about the money it would take to join a conference, but also about the guidelines the school would have to follow in order to qualify. He said numerous additional positions would likely have to be filled to accommodate most conference’s minimum requirements.

One change that has been made is that Concordia will play home football games at the schools on-campus football stadium this fall. In the past, the Hornets have played home games at Selma’s Memorial Stadium.

Young anglers would probably love to reel in a catfish this size at the free catfish rodeo to be held... read more