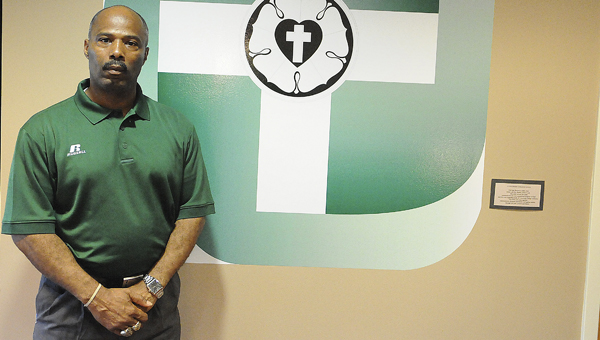 Concordia College Alabama football coach Stanley Conner stands in front of the college’s logo. Conner, who took over the football program in April, is hoping to turn around a Hornets’ football program that won only one game last season. –Daniel Evans

Conner, who was previously the head coach at Benedict College in South Carolina, and served as the running backs and secondary coach at Alabama A&M for 11 seasons. Now, he has the task of taking over a Hornets’ program that finished 2013 with only one win. He worked in the Hornets’ administration office last season and was on the football staff in 2012.

“I’m real excited,” Conner said. “I know the value of a good athletic program to a college and especially to the community.”

Lee, who is now the athletic director and head football coach at Virginia University of Lynchburg, ran an Air Raid offense that threw the ball so much that he often referred to it as “basketball on grass.” The Hornets’ offense will look a lot different this upcoming season, with Conner running a run-based, option offense.

“I know a lot of people like this fast-paced, run and shoot, no huddle, Air Raid kind of thing; but when you don’t have the personnel defensively it is not always a good thing because you put them in a bind,” Conner said. “I believe in carrying the game, so to speak, and being able to control it as much as possible. To be able to do that, you have to be balanced.”

Conner said he and Concordia athletic director Frankie Peoples, who took over that position in January, are focused on trying to solve the Hornets’ issue with attendance at football games.

“We have the fan base but you have to play the kind of games the fans can relate to,” Conner said.

He added that when the Hornets play a team that fans are familiar with, the crowd is usually large.

Peoples said he is expecting the Hornets to play football games on campus next year at Concordia’s on-campus field that has already hosted several soccer games.

“We plan to have all of our homes games to be played here on campus this year,” Peoples said. “My thinking is that the fan base of the student body will be there. It will be very exciting. It will be exciting for the community on Saturday afternoon to have some place to go, sit out there for an hour or two and watch college football.”

There are still some things that have to be finished in order for the Hornets to play football on the field this fall, but Peoples said they are “minor” issues that should be solved by football season.

The field needs a press box, a scoreboard and goalposts along with other football pylons and equipment to line the field off correctly. The Hornets currently play their home football games at Memorial Stadium.

9 and 10-year-old softball playoffs get underway

Woodmen of the World’s Daysha Smith collides with Interlink Drugs’s Mikiha Lindsey on a play at third base Tuesday night... read more