9 and 10-year-old softball playoffs get underway 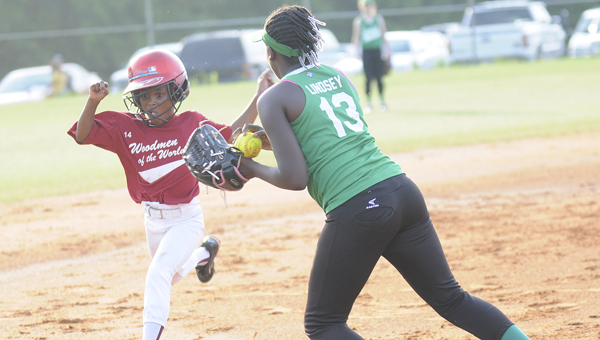 Woodmen of the World’s Daysha Smith collides with Interlink Drugs’s Mikiha Lindsey on a play at third base Tuesday night during the first round of the 9 and 10-year-old softball playoffs at the Dallas County Sportsplex. Woodmen of the World held on for a 5-2 victory.–Daniel Evans

Woodmen of the World didn’t have the regular season it had hoped for, but after one game it looks like the playoffs may be a completely different story.

Woodmen, the No. 5 seed in the 9 and 10-year-old coach pitch softball playoffs, defeated No. 4 seed Interlink Drugs 5-2 in the opening game of the postseason tournament Tuesday night.

“I coached them up all year to believe they could do it and now it is time for them to change their game and step it up and play for everything,” Woodmen of the World head coach Marquise Talton said.

Talton’s team must have got the message, jumping out to an early lead with three runs in the opening inning. Markaylee Talton tripled in the first inning to bring in a run and Tytianna Johnson singled to left field to bring in Talton. Adrionna Powell singled later in the inning to add a third run, giving Woodmen a commanding 3-0 lead early in the game.

Interlink answered in the top of the second with a double by Anna Grace Meeks to make the score 3-2 Woodmen, but that was as close as they’d get.

Destiny Horton doubled to score Johnson to give Woodmen a 5-2 advantage in the sixth and the score held up from that point forward.

State Farm, the No. 3 seed in the 9 and 10-year-old softball playoffs, scored three runs in the top of the fourth inning to break a 1-1 tie.

Town & Country closed to gap to 4-2 in the top of the fifth when Jakaylyn Patterson scored on a throwing error to make the score 4-2.

State Farm answered in the bottom of the inning as Shamaria Simmons scored to make it 5-2.

Town & Country attempted a rally in the game’s final inning and nearly pulled it off. Down 5-3 after Brea Gordon had scored in the fifth, Patterson doubled to center field and Town & Country elected to send Shannon Tate home to tie the game, but Tate was thrown out at home.

Town & Country still managed to get two runners on base with two outs, but State Farm forced Daiuanna Thomas to ground out to end the game.

A player with the Golden Ranch youth baseball team tries to connect on a pitch during a game recently at... read more