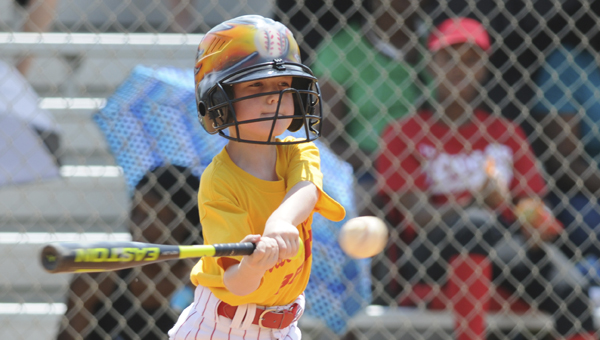 A player with the Golden Ranch youth baseball team tries to connect on a pitch during a game recently at the Dallas County Sportsplex. — Daniel Evans

After the early part of youth baseball and softball season was plagued by rain and stormy weather, the last two weeks have been gorgeous  and have allowed the season to speed along towards the postseason.

All of the boys baseball tournaments will start Monday, June 2.

“That’ll wrap it up for our regular season and then all-star tournamnets will start the week after that,” Lebo Jones, the Selma Recreation Department’s baseball and softball director, said.

Jones said this has been another successful season for youth baseball and softball, with only weather being a problem.

“We have had good crowds,” Jones said. “We’ve had a lot of rainouts but the recreation department has done everything it can to reschedule all the games. We played some Saturday afternoons and a lot of Wednesday games this year, which we don’t normally do.”