Report: Jobs added, investments made in county’s industrial base 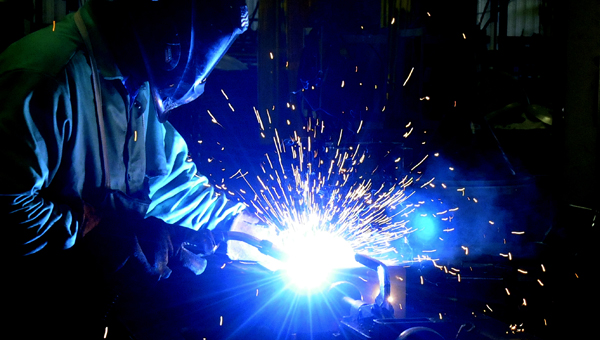 A welder at Bush Hog lights up the production area while completing one of the company’s well-known products. Bush Hog, which faced significant job losses in the past, is making a comeback and adding jobs. — File Photo

Dallas County gained 246 new jobs in 2013, according to a recent report released by the governor’s office.

In addition to the new jobs, the 2013 New & Expanding Industries Report showed that seven companies invested a total of $19,188,500 in capital within Dallas County.

The only company new to the county was Algix, which specializes in converting harvested algae into bio-products such as renewable fuels and plastics.

Wayne Vardaman, director of the Selma-Dallas County Economic Development Authority, said the focus of the EDA has been supporting companies that already have a foothold in the area.

“We have always focused on working with our existing industries and supporting them so they can grow,” Vardaman said.

Of the six existing companies — all located in Selma — that expanded in 2013, Plantation Patterns Furniture Company added the most jobs with 55. Hanil E-Hwa Interior Systems had the largest capital investment with more than $9.7 million.

One notable expansion was that of Bush Hog Inc., a company that employed more than 900 people at its peak. For 2013, Bush Hog added 25 new jobs, bringing its current total to 295 employees.

Vardaman said the recent expansion of Bush Hog is good news, but it’s a drop in the bucket compared to what the company used to be.

“A large part of our unemployment number comes from the jobs we lost from Bush Hog,” Vardaman said. “They’re coming back strong, so that will help, but it’s a long way from the employment they used to have.”

Compared to neighboring counties, Dallas County saw the most improvement in both jobs and capital investment. Lowndes finished just behind Dallas County with 200 new jobs, while Marengo and Perry County added a total of 26 new jobs.

Autauga and Wilcox Counties were not included in the report.

“We’ve got a lot of things going for us,” Ballard said. “We’ve got great resources, a good climate for business and one of the best workforces in Alabama, but it’s limited.”

Even with the influx of 246 new jobs in Dallas County for 2013, the local workforce is still suffering from rising unemployment.

The unemployment rate increase follows a decrease in the total workforce, down from 13,951 last year to 13,640.

Ballard said besides the limited workforce, the county has other obstacles that stand in the way of new industries.

“We’ve got a river that runs right through us, but I wish it was more navigable,” Ballard said. “We could really sell some industrial prospects that would use barges to get their products to the deepwater port in Mobile if that river was predictably navigable.”

The Selma-Dallas County area is no stranger to potential projects falling through.

In 2006, a potential partnership with Lockheed Martin and Craig Field in Selma was lost to a competing bid in Pueblo, Colo.

Vardaman said the experience of losing the Lockheed bid prepared the city for the future.

“We worked on that project for about two years, so we got a lot of things in place,” Vardaman said. “That experience helped us a great deal as we are now working to get the pilot training program at Craig Field.”

The International Pilot Training program, announced two weeks ago, could bring 300 new jobs to the area. Selma is a finalist in the bid for the program. The decision on which the program will be located will be announced in September.

Ballard said Dallas County is ready for the opportunities that lay ahead.

“I think we’re poised for the future,” he said. “This county’s in better shape than almost any county in the state in terms of debt, being current on our bills, morale in the workforce. We’ve got a good situation here. There are people who are pessimistic about Selma, but I’m not one of them.”