Future of local artist will draw on her talent 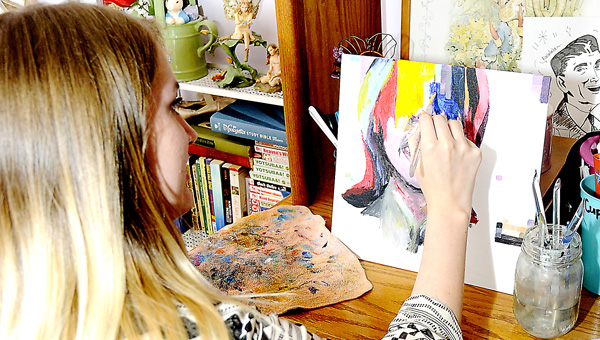 great work: Hannah Murray sits at her desk, cluttered with some of her other art pieces, and works on her latest painting. — Scottie Brown

If you can’t find Hannah Murray anywhere, her mom would say to check her room, where you’ll probably find her painting or drawing while listening to some folk band you’ve probably never heard about.

Murray, who plans to attend Auburn University in the fall, has been drawing the majority of her life.

In 2010, Hannah was able to have two of her still-life paintings put on display in the Montgomery Museum of Fine Arts. After being on display, one of the paintings was eventually purchased by the museum.

“It was very interesting,” Hannah said. “I mean I was really honored, and it felt nice. I felt very accomplished.”

But while Hannah remains modest about the accomplishment, her mother mentions the museum was not the only one interested in her work.

“As she was there, there were some adults who asked to buy it from her,” Susan said. “It was just kind of like ‘really?’ We know we enjoyed it, but we didn’t think anything of maybe anybody else enjoying it.”

Hannah plans to major in graphic design at Auburn. However, she originally planned to study studio art.

“The worry set in about jobs and money and all that, so I decided ‘well, maybe I can find a job that makes more money and is more stable if I went into graphic design,’” Hannah said.

But when you get down to it, she isn’t in it for the money.

“I just want my art to make people feel profound feelings,” Hannah said. “Whenever I go into art museums this feeling of profoundness just hits me in the chest. I want my artwork to do that to other people.”

The historic Edmund Pettus Bridge will be among the filming locations withing the city of Selma that will be featured... read more