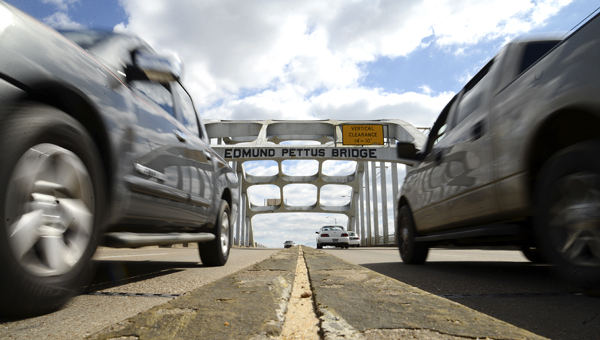 The historic Edmund Pettus Bridge will be among the filming locations withing the city of Selma that will be featured in the upcoming film ‘Selma.’ — Jay Sowers

Filming has begun on the movie “Selma,” a depiction of Dr. Martin Luther King Jr.’s fight to secure voting rights for all people, including the historic march from Selma to Montgomery.

Production companies Paramount Pictures and Pathé announced that principal photography has commenced on the film as of Tuesday, May 20.

The film, directed by Ava DuVernay, will be shot in Atlanta, Montgomery and Selma.

Notable producers of the film include Brad Pitt and Oprah Winfrey.

“This story will resonate deeply with not only those brave men and women who fought for voting rights alongside Dr. King, but also the countless millions of people who continue to fight against discrimination in voting today,” said Brad Grey, Chairman and CEO of Paramount Pictures. “This talented group of filmmakers, led by Brad Pitt and his team at Plan B, Oprah Winfrey and Christian Colson, and of course our director Ava DuVernay, are a formidable force to help bring this significant story to the big screen.”

Paramount is handling the film’s domestic distribution, Pathé will distribute in the UK and France and Pathé International will handle sales to the rest of the world.