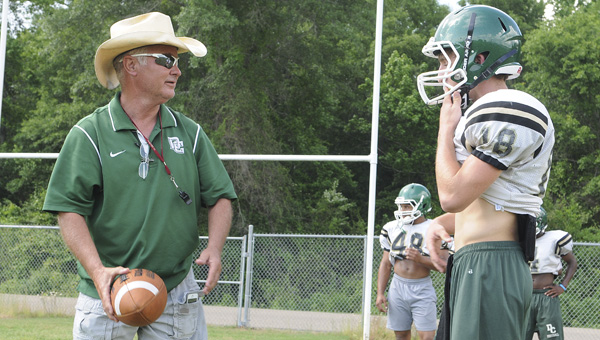 Colburn, who coached the Hornets to a 2-8 record in his only season as head coach at Dallas County, decided to step down following spring practices and Friday’s jamboree game at Marbury High School.

“In the best interest of the program and all concerned, I think it is best that I go ahead and resign as head coach of Dallas County High School,” Colburn said.

Colburn cited his commute from Tuscaloosa and health concerns as reasons for his resignation from the school.

“I’m getting a little older. My arthritis is pretty bad and I’m having a hard time mentally keeping up with the demands we have on this job with as few coaches as we do,” Colburn said. “I have a brand new grandbaby in the house and driving down here, I keep long hours. I try to get down here at 6:30 a.m. and stay until late at night and weekends, so it is pretty taxing.”

Colburn was an assistant coach for the Hornets in 2012 and was hired as Dallas County’s head football coach in July 2013.

“We will post the position as soon as we get the letter, and some time next week probably go searching for a coach,” Don Willingham, superintendent of Dallas County Schools, said. “I know coach Colburn hates to leave. He’s worked hard and I know he’s disappointed in the two seasons he has had too, but he’s a hard working man and I wish him the best.”

Willingham said he wants to hire a coach as soon as possible, but that there is no timetable in place.

The new coach will be the tenth in 15 years for the Hornets. Dallas County has not had a winning season since 2004 and is 19-71 over the last nine seasons.

Colburn served as a health teacher and physical education instructor for the school. Willingham said the new coach would likely need to have a health and P.E. background.

“We want stability,” Willingham said. “We would love to have a coach that is there for many years to come and develop the type program where we can be a contender each year.”

Colburn said he is confident the school will identify a qualified candidate and make a great hire to take over the program.

“I’m sure Mr. Willingham and Mr. Blair and the administration are going to go out and get a top notch coach — somebody that can come in here and take off with the program,” Colburn said. “I feel confident in that, so I get some pleasure knowing that.”

Although he has stepped down from the program, Colburn said he was proud of many things the team accomplished during his time at the school.

“I feel like we did accomplish something here,” Colburn said. “This year we have between 85 and 90 guys on the roster and that’s a great testament to our kids and the interest we have in our community. We managed to build a new practice area that we enclosed and I appreciate everybody that was involved in that. We didn’t have a water system on our football field and now we have an under field water system.”