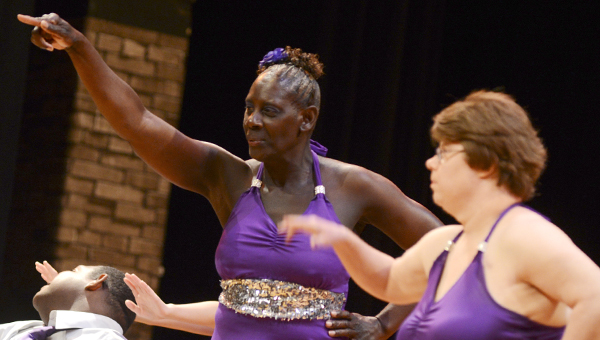 Doris King and Margaret Gamble point toward the audience during their dance. — Photos by Jay Sowers

The dancers from The Dance Studio were in full costume Thursday evening for a rehearsal at Selma’s Pickard Auditorium, but they weren’t the stars of their own show.

Thursday’s program began with five dancers from the Cahaba Center for Mental Health dancing together to Aretha Franklin’s “Respect.”

“We’ve been working on this dance routine since September, and they come to the studio for 30 minutes every week. They do this every year and they are the hit of the show,” said Rachel Colley, owner of The Dance Studio.

This is the fifth year Colley has taught dance to a small number of students from the Cabaha Center, and she said she gets as much out of the experience as they do.

“They are as much of a blessing to me as they say I am to them,” Colley said. “They become like part of my family.”

Lynn Sanders, residential supervisor at the Cahaba Center, said participating in the dance lessons and performing on stage allows the Cahaba students to show the audience there is more to them than any disability they may have.

“We want people to not just see their disabilities,” Sanders said. “We want them to see their abilities. It gives them a chance to be known for other things beside the Cahaba Center.”

Carrie Bearden, director of developmental disabilities services at the Cahaba Center, said Thursday’s event is something the participants look forward to throughout the year.

“They’ve been looking forward to this rehearsal for a long time,” Bearden said. “I know the classes are something they look forward to every week and they love being on stage having everybody clapping and cheering for them. It’s also good for me to see people love them as much as we do.”

Colley said the dancers aren’t the only people who were looking forward to the rehearsal.

“I know I absolutely love it, and every year I have parents from the studio asking me if the Cahaba kids will be here, and I joyfully tell them yes,” Colley said. “If you aren’t blessed after you see them dance, then something is wrong with you.”

Selma residents Regene and A.G. Middleton have raised flowers in beds around their Woodrow Avenue home for over three decades,... read more