Selma residents Regene and A.G. Middleton have raised flowers in beds around their Woodrow Avenue home for over three decades, but this spring, one flower has risen far above the rest; 12 feet above the rest, to be accurate. 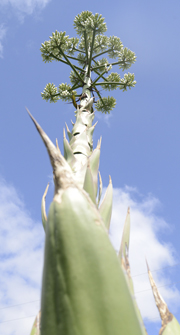 The couple’s agave plant, often called a century plant because of the rarity of its blooms, is in the process of blooming for the first time, and Regene said it’s been the highlight of her gardening career.

“In your gardening career, or whatever career you have, you have one thing might happen that kind of crowns it all, and I think this is it for me,” Regene said. “And after it blooms it dies. It’s making one last show.”

The agave plant will bloom once during its life, and it is not uncommon for them to live for several decades.

Regene said she started noticing changes in the 16-year-old plant late this winter.

A.G. said he noticed the flower’s bloom rose at an incredible rate.

“I was watching it carefully and I honestly think it was growing more than an inch every day,” A.G. said. “It amazing to watch.”

At roughly 12-feet tall, Regene said the plant has caught the attention neighbors and passing motorists.

“I have seen one in Myrtle Beach that was as tall as a telephone pole. This one didn’t get quite that tall, but I’m still impressed,” Regene said. “ I know so many of my neighbors have been saying this is something they haven’t seen before, and I really want to share it with the community because I know it is so rare.”

While she has enjoyed watching her agave bloom this year, Regene said she hasn’t considered planting another one.

“I don’t want another one. This is it,” Regene said. “I’ve been snagged on this plant’s thorns enough. I think I’m ready just to have a yard full of roses, snap dragons and lilies.”