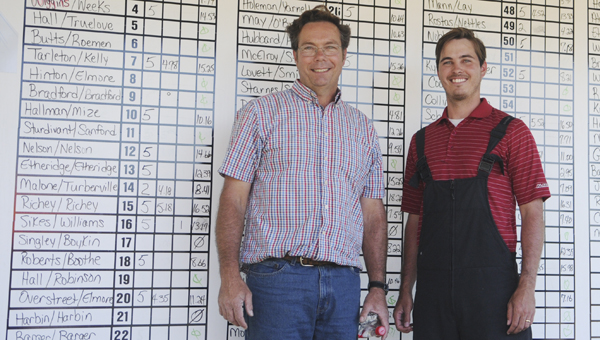 Selma’s Mark Mott and Justin Mott were the last anglers to register for Saturday’s McNider Marine Iron Man Trail Tournament, but they also had the last laugh.

The duo caught five fish for a total of 19.83 pounds to soar past Demopolis’ Gabe Aldridge and Scott Freeman, who appeared to be sitting pretty with a total of 18.2 pounds.

Instead the Mott’s, who were among the last anglers to weigh, grabbed the lead late and then held on to win their first Iron Man Trail Tournament title. The fact that this tournament was being held just miles from their house, made this win a little extra special for the father and son tandem.

“It feels pretty good,” Justin said while smiling at his dad. “I’m not going to lie. With a tournament this big, it is a great feeling.”

The McNider trail made its first stop in Selma Saturday and the Mott’s, who regularly fish the trail, welcomed it with a win for the locals.

A total of 85 boats took part in Saturday’s tournament, which is a smaller turnout compared to the numbers the trail usually attracts.

“Overall I thought we had a good turnout. We were down a little,” trail organizer Bruce McNider said. “We usually have about 97 or 98 and we had 85 which is still a good turnout for the first time up here.”

Despite the lower turnout, there was a lot of competition at the top of the standings. Five teams had totals above 16 pounds, including Livingston’s Chad Schroeder and Chase Schroeder, who led the McNider Marine Iron Man Trail Tournament standings entering the event.

The Schroeder’s finished fourth Saturday, with a total of 16.5 pounds.

Selma quarterback Adrian Smith hands off to running back Kerry Ford during Friday’s intrasquad scrimmage. The Blue team, made up... read more