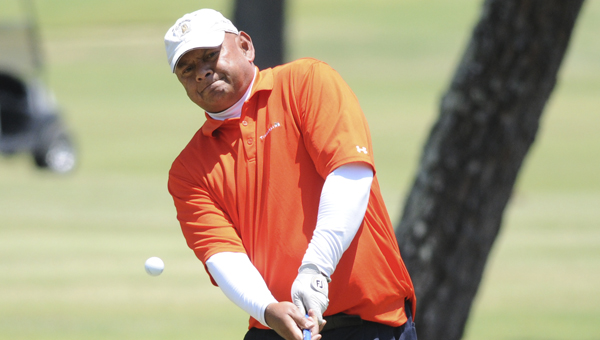 Selma’s Moses Ngirailab hits a pitch shot onto the 18th green during the second round of the Alabama Golf Association’s State Senior Championship. Ngirailab shot a 70, the second lowest round of the day. Only Birmingham’s John Lyon shot a lower round Saturday, carding a 69.–Daniel Evans

Players in the Alabama Golf Association’s 17th annual State Senior Championship were greeted by much nicer course conditions Saturday at the Selma Country Club, allowing for several players to shoot up the leaderboard and get into contention before Sunday’s final round.

Steve Hudson from Birmingham remains on top of the overall standings, shooting a 72 to finish the second round as the only player under par at a total of 141.

Fairhope’s Robert Nelson is one shot behind at even par, followed by John Lyon and Mike Greer from Birmingham at two over, 144.

Hoover’s Scot Schroder made one of the day’s biggest moves, jumping into contention with an even par 71 that leaves him only six shots back going into the final day.

“I played great. The golf course is beautiful, the hospitality has been great … This is the first time I have ever been to Selma and I’m having a very good time and I’m enjoying myself,” Schroder said.

With the wind howling Friday and the course still recovering from rain earlier in the week, only Hudson and Nelson entered Saturday in red numbers. In round two, pristine weather conditions allowed eleven players to shoot 72  or better. In round one, only three players carded a 72 or better.

“The wind wasn’t as harsh as yesterday so it was a little easier,” Selma’s Moses Ngirailab said after shooting 70. “A lot of people will probably shoot a better score today too.”

Ngirailab took advantage of Saturday’s conditions, following a first round 79 with a 70 to soar into contention. To win the overall competition, Ngirailab will likely need a spectacular round and a little help, but if he keeps the mindset he had on Saturday he might be able to make a big move.

“Some of the greens are really stiff so you have to be patient and not go over them like I did [Friday],” Ngirailab said. “I made too many mistakes [Friday].”

It’ll take a lot of work to catch Hudson, who won the State Senior Championship in 2011 and the 2010 and 2012 State Mid-Amateurs. He has also won the Alabama Golf Association Player of the Year multiple times.

Selma’s Don Blanton, who entered the second round with the 65-and-older lead, shot 80 and fell four shots behind Schwartzer. Blanton shot a 40 on the front nine and back nine.