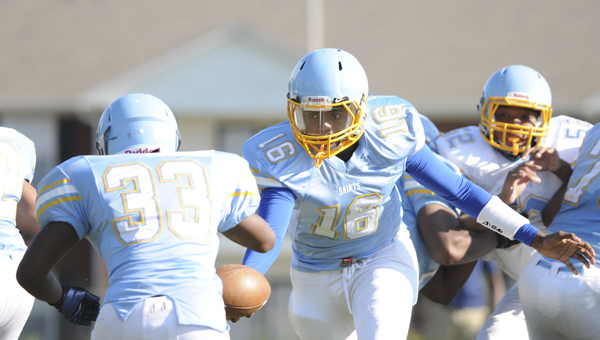 Selma quarterback Adrian Smith hands off to running back Kerry Ford during Friday’s intrasquad scrimmage. The Blue team, made up of the first team offense, scored only a single touchdown against the White team, which consisted of the majority of the Saints’ starting defense.–Daniel Evans

It’s hard to imagine a football team having a successful spring before it even hit the field for practices, but that was the case for head coach Leroy Miles and the Selma Saints.

Miles had never had a player offered a scholarship during his junior season until this year, but now the offers seem to be rolling in every week. All of the attention his players are receiving left Miles wowed before his players even took the field Friday for their intrasquad spring scrimmage game, which served as Selma’s jamboree contest.

“It’s a great feeling to know that we have a program in place that is giving the kids an opportunity to play at the next level,” Miles said.

Friday’s scrimmage — like most spring contests — was a roller coaster ride of exceptional talent and sloppy plays, such as high snaps, miscommunication in the backfield and fumbled footballs.

“There was some good, some bad, and some ugly,” Miles joked.

The teams were broken down into two squads, with the Blue representing the first team offense and the White consisting mostly of starting defensive players.

The teams cycled players in and out the entire way, giving the entire 63-man roster a chance to show what they could do.

The scrimmage was 40 plays long and was highlighted by a single touchdown, which was thrown by quarterback Jesse Boggs to wide receiver James Johnson, giving the Blue a “win” in a game where no score was kept and where the White never actually touched the ball.

However, Miles was most impressed by his defense, which has been reworked this spring after giving up over 34 points in five games last season.

The defense gave the Blue team fits the entire way, holding a Saints’ offense that scored 29.4 points per game last season to just one score in 40 plays.

“We weren’t able to run the ball,” Miles said. “They caused some problems for us offensively with the defense we went to. We have made a lot of progress defensively and I think we are going to be able to stop people from running the football and throwing the football.”

Miles said the goal of this spring was to develop young athletes so the Saints could add depth. Selma is moving up to Class 6A under the Alabama High School Athletic Association’s realignment for the 2014-16 school year, so Miles wants as many players as he can get on the roster.

“The numbers aren’t where we would want them,” Miles said. “We had somewhere around 60 kids out for the spring, but still we need more.”

The McNider Marine Iron Man Tournament Trail will make a stop at the Selma City Marina Saturday. The trail is... read more